Among my earliest memories are sharing my bed with a Siamese cat called Pandy.   Growing up I was surrounded by pets – feline, canine, my much-loved rabbit Bugs, Greg the guinea pig, as well as an assortment of golden hamsters and white mice.  Most of my teenage years were spent with a cockatiel on my shoulder: Tokai especially liked it when I cycled to the shops – he’d dip his head into the wind and seemed really to enjoy the rush of air in his face.  On a hot summer’s day he’d love nothing more than flexing out his wings while I gave him a cooling shower with the hosepipe.

I was never in any doubt that, like the human members of the household, the animals were conscious, thinking and feeling beings.  Just like us they sought happiness at every opportunity and did their best to avoid anything unpleasant.  Just like us they had individual quirks, preferences, likes and dislikes.  Bugs, for example, enjoyed nothing more than a share of chocolate cake which he’d eat sitting on his hind legs off the bottom tray of the tea trolley.  When he’d had enough, he’d put his front feet back on the ground, thump those strong, back legs vigorously on the carpet a few times – it seemed to us, in a gesture of unfettered glee – before racing out of the sitting room into the garden, where he enjoyed a good burrow.

Growing up in Zimbabwe’s Christian-based culture, I was troubled by the ambiguity about animal consciousness.  On the one hand elephants, for example, were lauded for their sensitivity, memory, intelligence and evolved sense of family.  On the other, the prevailing view was that what distinguished people from animals was that we had souls and they did not.  This idea, combined with biblical references to dominion over animals, meant it was okay to hunt them for sport, farm them for meat and generally treat them as though, on some level, they didn’t experience suffering and pain or seek happiness just like we do.

Exactly how you could tell whether or not a being had a soul was not a subject for discussion – it was an article of faith.  And one I found perplexing.

So when I encountered Buddhism in my late 20s, it made perfect sense that all beings, human and animal are regarded as ‘sem chens’ or ‘mind havers.’  There being no concept of a ‘soul’ in Buddhism, this dichotomy between animals and humans simply doesn’t exist.  This is not to say that the mind of a cockroach is the same as that of a human.  But both beings have consciousness.  Both seek happiness and the avoidance of pain.  The life of a cockroach is as dear to the cockroach as my life is to me – as is clear to observe when you chase them (these days, in my case, with a large, empty match box, rather than a can of insecticide).

It is only in the past couple of decades that scientists have started taking seriously the subject of animal consciousness .  And just as the sensory perceptions of animals are quite different, and in some cases, vastly superior to ours, biologists are still in the early stages of understanding how the consciousness of different species operates.  There have been some truly surprising discoveries.  Just one example: in an experiment replicated in a number of counties, using video cameras in the home, it has been shown that dogs can tell when their owners are leaving work to return, no matter how much the routine is varied (see Rupert Sheldrake’s ‘The Sense of Being Stared At’).  Even more startling were the discoveries by Irene M Pepperberg about an African Grey Parrot, who not only demonstrated that he knew what he was saying, he could even articulate what Irene was thinking or looking at in the next room! (See ‘Alex and Me’ by Irene Pepperberg).

I personally find animal sentience an immensely exciting field of enquiry, and was glad to include a chapter in ‘The Art of Purring,’ exploring this subject more deeply.  What does our narrator, HHC (His Holiness’s Cat) discover?  What astonishing facts are revealed?  Is animal consciousness, in some ways, more subtle than ours?

This, dear reader, you will need to find out for yourself.  You can read it all here in The Dalai Lama’s Cat and The Art of Purring. 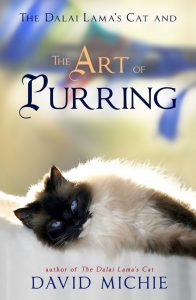 US and UK covers of The Art of Purring