Picture the following scene, dear reader.  It is a busy morning at the Himalaya Book Café.  With less than an hour before lunch service, I am sitting on my customary spot on magazine rack, nostrils flaring as I try to identify the delightful aromas wafting from the kitchen, where the Dragpa brothers are working their usual culinary magic.  In my mind a question arises that has challenged all the Greatest Thinkers since the time of the Buddha himself: what is for lunch?

I am ruminating on just this when a small dog appears at the front door.  He is looking directly at me.  Being a feline of considerable beauty and fame – the very reason, in fact, that many tourists beat a pathway to Dharamsala – I am quite used to being the focus of others’ attention.  Though not often a dog’s.

Dozing under the Reception counter, Marcel and Kyi Kyi are awoken by the olfactory alert of the visitor and instantly prick their heads up above their baskets.  They take in the corgi, who is on a leash, led by an elegantly-attired, no-nonsense sort of woman.  They require only a moment to decide that there is no cause for alarm.  Their heads settle down again.

Head Waiter Kusali, the omniscient Jeeves of the establishment, smoothly ushers the lady visitor and her canine friend to the banquette at the back of the dining room – which is also the one closest to me.  The visitor settles, orders a pot of English Breakfast Tea, and picks up a copy of that day’s Times of India, which happens to be lying on the table.  She is soon engrossed in the front page story.

Dear reader, given your undoubted powers of clairvoyance, arising from the countless hours you spend in calm abiding on your meditation cushion, I am sure you will already know exactly what happened next.

That’s right: the small corgi made his way surreptitiously from under the table towards the magazine rack.  He placed his two front paws on the lowest shelf, levering his low-level body upwards so that he was looking directly into my sapphire blue eyes.

“How do you do HHC, Rinpoche, The Most Beautiful Cat in the World and Muse of the Animal Realm!’ he greeted me, in a tone that somehow combined sincere reverence with great warmth.

I regarded him carefully.

I won’t pretend that dogs rank high on my likeability index, but there was something about this particular one that was instantly engaging.  Cute, even.  I shocked myself with my own benevolence towards this unknown canine.  Or was my sense of bodhichitta finally evolving?

‘Good morning,’ I managed, trying to maintain my Himalaya-cool demeanour.

‘I hope I didn’t miss any of them out,’ he cocked his head with a smile.

I had no idea what he was talking about.  ‘Any of what out?’ I asked.

‘Any of your titles.  I know you are a cat of many titles.’

‘Oh.  I see,’ I took in the friendly brown eyes, the tongue lolling from his wide mouth.  Barely out of puppyhood, he had an awareness of diplomatic niceties well beyond his tender years.  Where was he from?

‘We don’t worry about that sort of thing up here,’ I enlightened him.  ‘It’s not titles that matter, but what we think, say and do.’

‘You see, I knew we’d be on the same wavelength!’ he enthused, propping himself even higher up the magazine rack, the stump of what used to be a tail, twitching with excitement.

Usually, such a move from an unknown dog would have provoked a lightning-swift thwack to the nose.  But so undisguised was this one’s appreciation that the thought never even occurred to me.

‘As it happens,’ I said, ‘you used a title I’ve never heard before.’

‘We came up with it at the Palace,’ he wagged his stump. ‘I spend a bit of time with the Chief of Protocol.  I thought ‘Muse of the Animal Realm’ had a certain ring to it.’

‘That’s the reason I’ve come to see you,’ he said excitedly.  ‘I wanted to tell you that you’ve been a muse to me!  It was your example that gave me the confidence to write my own book.’

Things quickly fell into place.  I knew, from that morning’s meeting between His Holiness and Tenzin, one of his private secretaries, that the Queen of the United Kingdom would be visiting that morning.

‘I see,’ I replied.  ‘I had thought about staying up the hill to meet your person.  Maybe to sit on her lap.  But the food here …’

‘I know what you mean,’ he glowed as our eyes met in a moment of mutual understanding.  Queen or no queen, few things could compete with a delicious plate of sole meuniere … to name just one example.

Nelson’s smile broadened.  ‘Wonderful!’ he smiled.  ‘I mean, she looks just like you would expect her to.  But when you are actually with her, you feel this …’

‘I do,’ I agreed.  ‘His Holiness is famous for his Presence.  When beings are with him, it’s like they melt.  They seem to understand that, whatever else is going on in their lives, beneath the surface, all is well.’

Given that there was no imminent sign of lunch from the direction of the kitchen, I decided to probe further: ‘What is Her Majesty’s Presence like?’

‘She has this way about her,’ explained Nelson, ‘- this benevolent but firm expectation that everyone she meets is trying to be the best that they can be.  Because she leads such a purposeful life, she inspires other beings to be more purposeful too.’

For a moment my whiskers tingled.  ‘Purposeful?’

‘That’s what my book is about.  The Queen’s Corgi: On Purpose.’

‘It’s exactly the same as the books you have written,’ said Nelson.  ‘But different.’

‘A dog’s eye, behind-the-scenes account of life with The Queen?’ I queried, playing the part of the Grand Old Feline of Letters challenging her canine novice.

‘Profound wisdom and life-enhancing insights richly embroidered into every chapter?’

‘Plenty of warm, cuddlesome moments that make you simply burst with good feeling?’

‘What you’re saying, young man,’ I delivered my most imperious, blue-eyed gaze, ‘is that you’re a thief who has stolen my idea.’

Nelson’s face was filled with horror.  ‘It’s not like that, HHC!’ he took a step back down the magazine rack.  ‘I would never … I mean …’

The sight of his charming little face so troubled made me bring my teasing to a swift end.  ‘I was only joking.  You can’t steal an idea.  Only the expression of an idea.  And I’m sure your expression is much more …’

Relief restoring his golden features to their puppy-ish charm, he stepped back up towards me.

‘Actually, I was hoping you might endorse my book.’

Celebrity has brought me many things over the years.  But this was the first time I’d been asked to endorse the work of a fellow sentient being.  And a dog at that.  But what could be more delightfully Buddhist and ecumenical than agreeing to his request?

‘What sort of thing would you like me to say?’

‘That’s up to you, HHC.  Perhaps, “This book is more delightful than a roll in my local catnip patch.”

It seemed that the Queen’s Corgi was familiar with the events described in my work.

‘“As aglow with benevolence-” I proposed, ‘”- as a rainy afternoon spent meditating with the Dalai Lama”?’

‘What about-’ Nelson was enthusiastic, ‘-“better than Mrs Trinci’s diced chicken liver”?’

‘That would never work,’ I had to stop him in his tracks before he became completely deranged.

‘An endorsement has to be believable.’

I took in his despondent expression.  ‘Don’t worry, young man.  I’ll come up with something.  I just have one question: why Nelson?’

‘You’re good at bringing people together?’ I asked.

‘That part of it,’ he agreed, glancing away.

‘And the other part?’

For the first time, the Queen’s corgi looked a little sheepish, if such a thing could be attributed to a member of a breed with strong herding instincts.  ‘Nelson was the only person who called the Queen by her first name.  It was thought by some of the courtiers to be a bit … over-familiar.’

My ever-perceptive whiskers were tingling again.  ‘And you were over-familiar too?’ I asked the novice, eyes narrowing.

‘It was a long time ago,’ he confessed.  ‘And it wasn’t really a person I was over-familiar with.’

‘No.’  His sheepishness seemed only to be deepening.  Nelson was becoming more sheep-like by the second.  Keep going at this rate, and he would start sprouting wool and bleating.

‘Well, if it wasn’t a person, then who, exactly, were you over-familiar with?  Out with it young man?’

After the most awkward of pauses, Nelson finally admitted to his shameful secret,

‘Indeed!’ my eyes gleamed curiously.  ‘Anyone I might have met?’

His expression was rueful.  ‘You almost certainly have.’

‘You naughty pup!’ I mock-scolded him.  ‘Well, are you going to tell me who?’

It was at that precise moment that the Queen’s Lady in Waiting, having torn herself away from the front page of The Times of India, spotted Nelson near the bookshelf and called out to him in a cut-crystal, two-tone voice, ‘Nel-son!’

Kusali, who happened to be walking past, paused in his tracks.

‘I’m sorry,’ explained the woman as they took in the two of us.  ‘He’s very gregarious.  Can’t resist a chat.’

Kusali regarded Nelson closely, instantly surmising who he was.  ‘I am sure the two of them have much to chat about,’ said he.

And that, dear reader, was that.  I’m afraid Nelson never got to tell me whose leg he had been over-familiar with.  Not personally.  But I found out when I read his book.  And the answer to this enigmatic question was …. No!  I won’t spoil the surprise.  If you want to find out, you will simply have to read the book for yourself.

Dear reader, I have no doubt at all that you will find The Queen’s Corgi every bit as engaging, intriguing, stimulating, insightful and warm-hearted as my own, quite delightful compositions.

And so, here goes for the endorsement: “The Queen’s Corgi: On Purpose is nearly as good as Mrs Trinci’s diced chicken liver.

There.  The most effusive, but believable approval I could ever bestow! 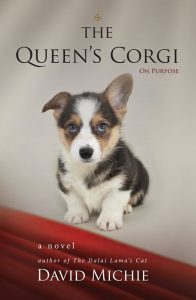 I hope you enjoyed this introduction.  If you did, here’s a few things you can do: