I’d like to share an excerpt from my book, Enlightenment to Go, which deals with exactly this question.

How better than to illustrate with the example of an Englishwoman who spent twelve years meditating alone in a cave in the Himalayas? 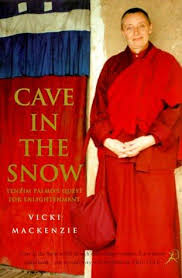 A concern I’ve heard expressed is that too much time spent meditating, or developing other inner practices, could result in people losing touch with reality. No doubt the glassy-eyed tree-huggers of some New Age communes have contributed to the view that if you’re not careful you’ll get so caught up contemplating your own navel that you’ll forget to pay the phone bill.

My observation is the opposite of this. In Tibetan Buddhism the impact of inner development makes people operate more effectively in the everyday world. In fact, it seems to provide them with skills and resources they wouldn’t otherwise be able to draw on.

Early on during my days as an Australian-based PR man, I was asked to help arrange some media coverage for the Buddhist nun Tenzin Palmo, who would soon be visiting Perth. The request was a long way from the mortgages and investments which are my standard work fare, but I was so intrigued by the prospect I couldn’t possibly say no. I had read about the amazing life of Tenzin Palmo in the biography Cave in the Snow. An Englishwoman who had been drawn to Buddhism for as long as she could remember, Tenzin Palmo had left England for India when she was only twenty and became one of the first Westerners to be ordained as a Buddhist nun. But she was probably best known for the fact that she’d spent twelve years on a solitary meditation retreat in a remote cave in the Himalayas. It seemed such an extraordinary experience for anyone to have gone through, an English-speaking Westerner in particular, that I jumped at the chance to meet her. 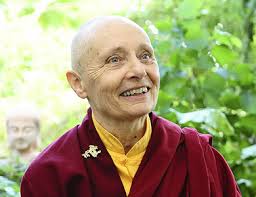 The opportunity came one morning at the local ABC radio studios where she was being interviewed. Greeting the diminutive figure in her red and saffron robes for the first time, I received an immediate impression of her as someone who knew exactly what was going on. Astute, alert, articulate, it was instantly evident that she had a penetrating intelligence. This was someone who could sum up the true nature of things in a flash. But balancing her otherwise intimidating perceptiveness was a touching warmth. When she smiled, she beamed from ear to ear, her whole face lighting up and blue eyes dazzling.

If, during her twelve years in retreat, Tenzin Palmo had focused on the ultimate nature of reality, this clearly hadn’t created some sort of handicap to her work in the conventional world. If anything, it seemed only to have enhanced her effectiveness. Starting by teaching a handful of girls in just one room, step by step she has built a nunnery to help address the traditionally huge gender imbalance in Tibetan Buddhist training. Dongyu Gatsal Ling is now a substantial centre with 100 resident nuns, a study centre, a retreat centre and a traditional temple. Tenzin Palmo has raised funds to meet the significant costs of land and buildings by travelling extensively each year and giving teachings in many countries. She has written several inspiring Dharma books, Reflections on a Mountain Lake and Into the Heart of Life. And along with her formal role at the nunnery, she has also played an equally important informal role as carer, guardian and ‘mother’ to the many young girls who travel from the Himalaya border regions of all over India, Tibet and Bhutan to study the Dharma. 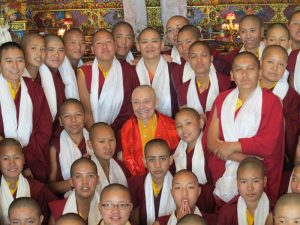 In 2008 Tenzin Palmo was awarded the prestigious title of Jetsunma, by HH the Gyalwang Drukpa, head of her lineage, in recognition of her achievements.

Tenzin Palmo has no training or qualifications as an architect, fundraiser or project manager. Nor is she a professional public speaker. She did not spend her life helping to manage a nunnery before establishing Dongyu Gatsal Ling. And yet her achievements in all these areas have been exemplary. From all the collective evidence, it would be hard to conclude that her twelve years of intensive inner development somehow made her less capable—indeed, quite the opposite.

As my teacher often says, when we shift our focus from external to inner development, paradoxically we find the external world easier to deal with. When we abandon the limited preoccupations of what he calls ‘the sesame seed mind’, with its narrow, external, here-and-now concerns, not only are we happier but we also become more effective operators.

Since my book was published, Dongyu Gatsal Ling Nunnery has grown even more in many wonderful ways.  If you’d like to find out about Jetsunma Tenzin Palmo’s amazing work, or may be interested in sponsoring a nun, please go to: http://tenzinpalmo.com/  I have been an enthusiastic supporter of DGL for many years.

I hope you found this blog useful!  Here’s a few things you can do:

Other blogs you may find of interest:

What happens to our mind when we go into nature?

Why Mindfulness is Better than Chocolate – read the first chapter here

For your copy of Enlightenment to Go: 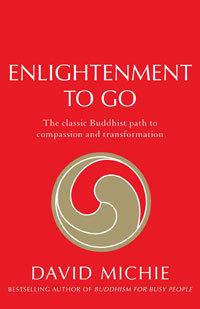