Last month our Mindful Safari group visited one of the most extraordinary wildlife sanctuaries in Southern Africa, the Zimbabwe Elephant Nursery (ZEN).  Established by Roxy Danckwerts in 2012, ZEN is situated within Wild is Life Trust (1998), taking care of orphaned elephants as well as many other animals who cannot be returned to the wild.

Most of us animal lovers cherish the contact we enjoy with our pets but can only dream of getting up-close and personal to iconic African animals like elephant, giraffe, wildebeest and the extremely rare pangolin.  At Wild is Life we were able to do exactly this, and I know that every person in the group found the experience quite magical.  They didn’t need to tell me.  I could see it in their shining eyes and radiant glow.  At least one person told me she’d found the visit “life-changing.”

A lot of the reason this visit was so special has to do with our state of mind when we arrived. Our “Meditate with Elephants” experience came after a week of spending most of our time outside and taking in the truly wonderful natural vistas around Victoria Falls on Mindful Safari.  Simply being out in nature relaxes both mind and body.  Our sense of gratitude is enhanced as we become aware of how daily survival is not something that can be taken for granted for most beings.  Our awareness that we, too, arise from nature, completely dependent on the earth, the air, water and the sun, deepens our sense of connection to other living beings, as well as our empathy with them.

Immediately after arriving through the gate at ZEN/Wild is Life, we found ourselves in an Edenic landscape with some of the amazing animals we’d seen from afar, moving around freely close by us.  Almost immediately, we were approached by a group of curious giraffes, making us wonder exactly who was coming to check out who in this scenario!

Treated to a light lunch after our one hour flight from Victoria Falls, Roxy began a presentation emphasizing how all the animals at ZEN should be seen as individuals. Each came here with their own stories and traumas.  In the cases of several elephant calves, the way in which they’d become orphaned is truly horrifying.  As most readers probably know, elephants are social animals, highly protective of their young.  There is no way a calf would find itself on its own in the wild if it wasn’t for human predators.

While Roxy made these points, Mirabelle the giraffe evidently felt that the mood needed lightening.  Stepping into the enclosure where we humans were penned, she headed over to where Roxy was standing next to her laptop, and began to demolish the flower arrangement.

Next it was time to meditate with the elephants … and the giraffe, and any other beings who wished to join us.  ZEN has the most beautiful reception facility, with a number of different decks, verandas and indoor /outdoor spaces, all giving different vantages to the animals.  For a while we sat in comfortable chairs and I guided the group into a state of relaxed focus.

When we opened our eyes … there they were.  The small herd of orphaned elephants had arrived.  For a period of some minutes we sat, simply being in their presence, and practising a simple “meta-out, meta-in” meditation, in which we offer loving-kindness to the beings before us, as well as open ourselves to the possibility that they may wish to communicate something to us. For a while we tried to get on the same page as them, letting go of our usual narrative chatter, and being simply present, appreciative and open. (For more on how to practice metta meditation with animals go to: https://davidmichie.com/how-to-practice-metta-meditation-with-animals/)

Afterwards, we were introduced to the individual elies, with Alex, one of the animal carers, sharing the story of each one. When baby elephants arrive at ZEN they require a special milk formula – normal cow’s milk is inadequate and gives them gastric problems.  Roxy is in contact with the David Sheldrick Elephant Orphanage in Kenya, with both organisations seeking a milk formula that is both optimal for the elephant calves … and affordable.  Right now, it costs around US$4,000 a month to provide a single elephant calf with milk.  As calves require milk for years, from a financial perspective alone, keeping a baby elephant alive is a massive undertaking. 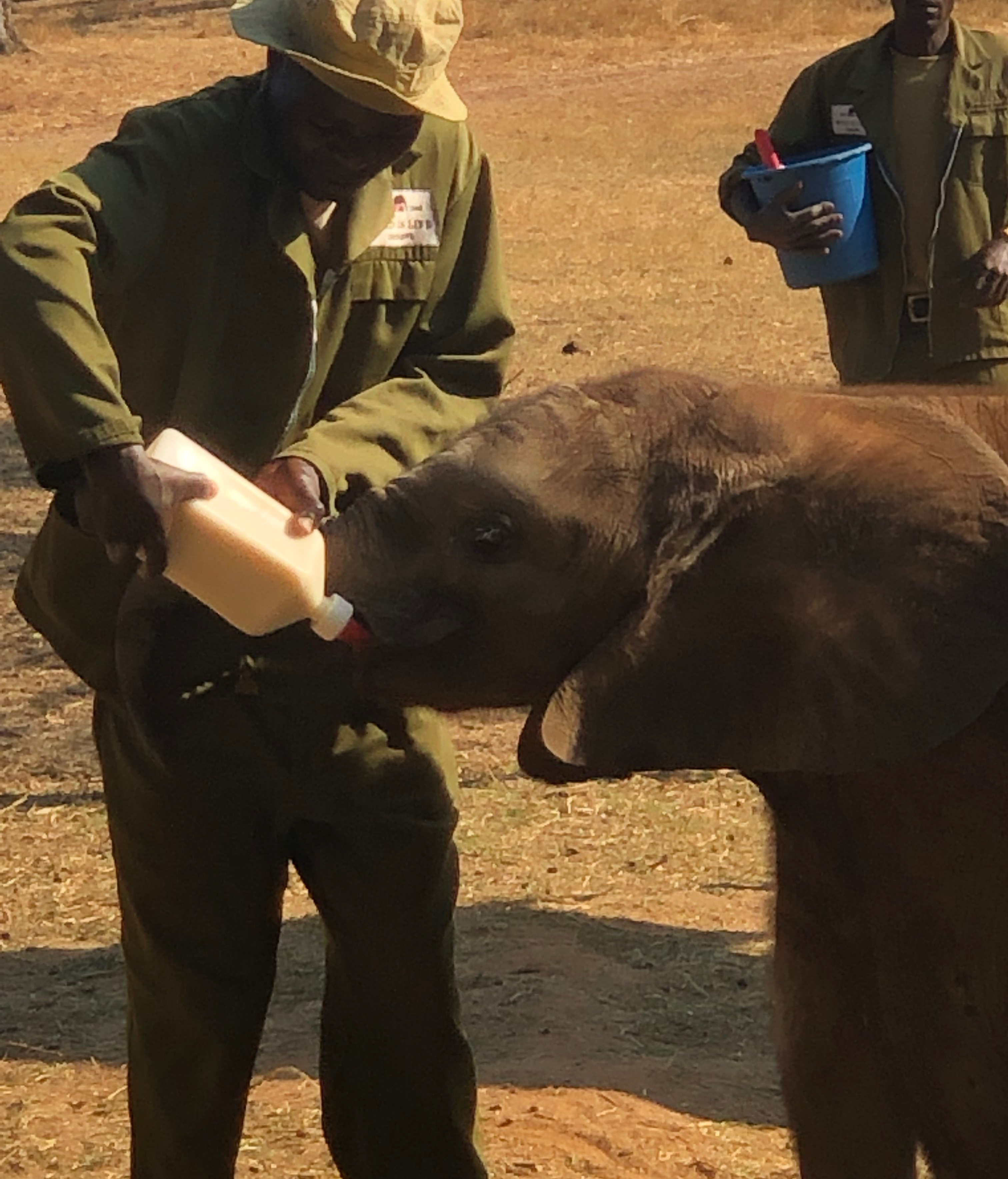 And there is much more to it than physical nourishment. Given the very deep bond that exist between mother and calf, when an elephant becomes orphaned, unless the calf is offered physical contact, love and support 24 hours a day, he or she will not survive.  As Roxy puts it simply, “they die of a broken heart.”  For this reason, every elephant calf is allocated a small team of carers who not only provide nurture and affectionate contact throughout the day, but who also sleep with them at night. 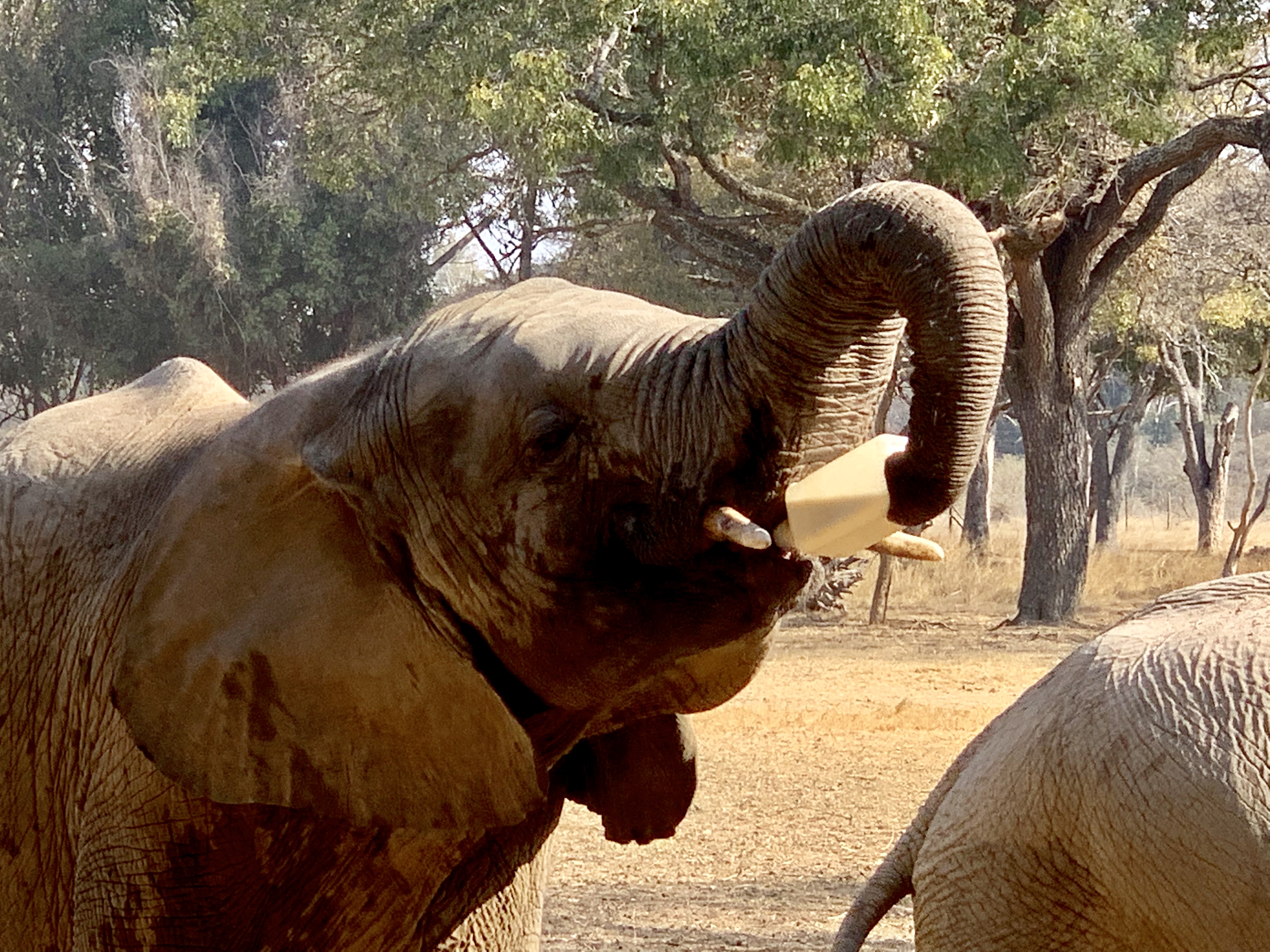 After being introduced to the elephants, it was time to feed the giraffes.  Having watched these amazingly gracious animals in the wild, there is something quite enchanting at being able to interact with them at close quarters.  The blissful expressions of everyone’s faces as these gentle giants leaned down and stripped the branches of every, last leaf was simply priceless! 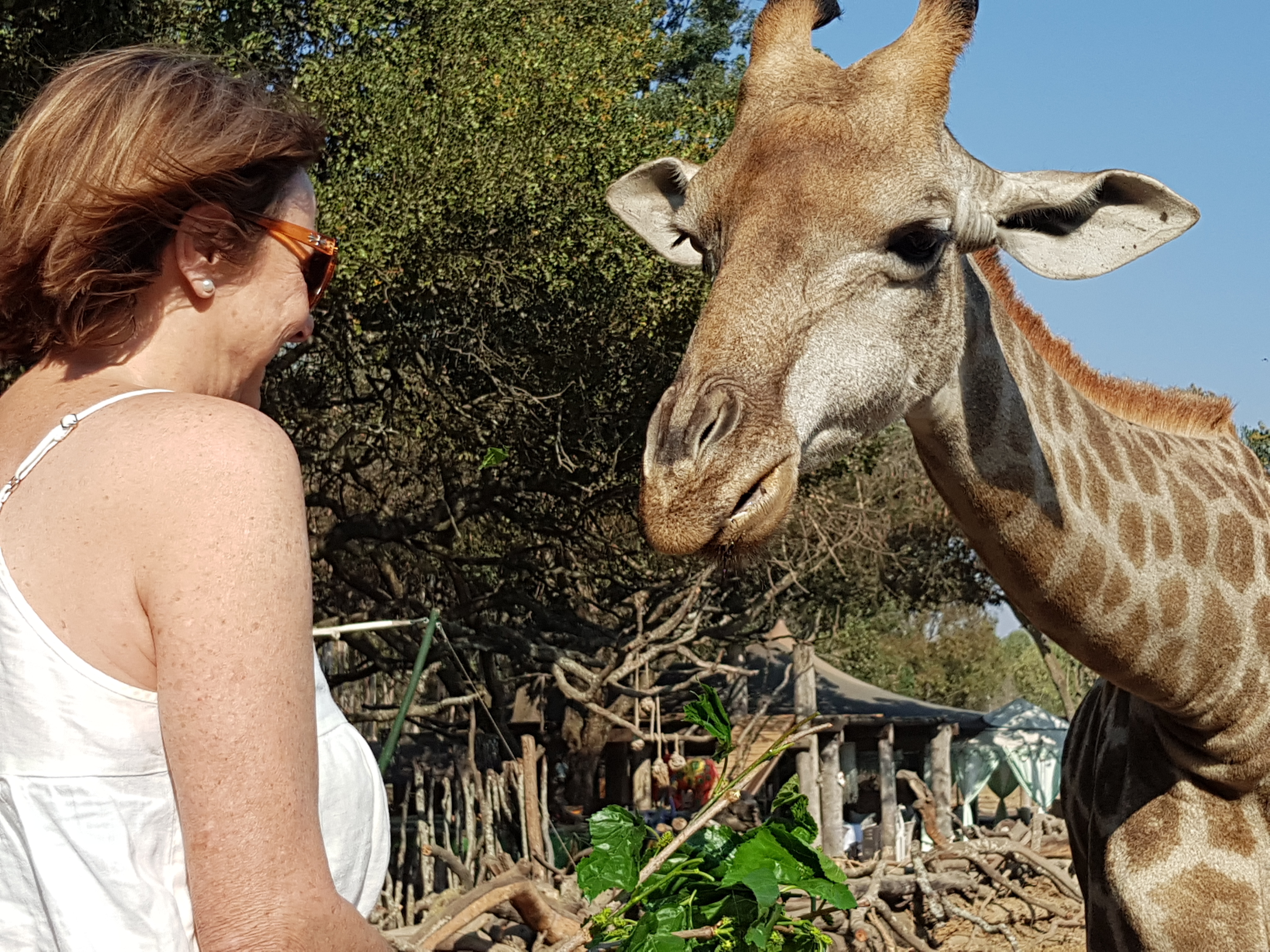 Every visit to ZEN is different because you never know who will be awake and up for a visit.  One of my personal favourites is Noodle the wildebeest who, believe it or not, is fond of a cuddle.  But you do have to watch out for his horns!  Wildebeest are sometimes unkindly called ‘spare parts’ because they look like they’ve been assembled from a number of different body parts that don’t quite go together.  I know this isn’t a great photo of Noodle, but he’s an elusive buck – and, to me, all the more endearing because of it. Another favourite of mine is the hyena.  These animals have always had a bad rap, and the Lion King movies have only reinforced the negative stereotypes people have about hyenas.  But they are intriguing animals, neither dogs nor cats, who don’t scavenge any more than lions do.  I personally think their soft, fur coats have beautiful markings, as demonstrated below by handsome Harry.

One of our most extraordinary encounters was with a pangolin.  Pangolins, or scaly anteaters, have the misfortune of being the most heavily trafficked mammals on earth because their scales are wrongly believed to have special medicinal qualities in some Asian countries – in fact, like rhino and elephant horn, their scales are as special as human fingernails. As a result of massive hunting, these most gentle and intriguing of creatures have been killed to the point of extinction.  You will almost never see one on a game drive, so a place like ZEN offers a unique opportunity not only to see a pangolin, but to be able to observe this incredible little being close up.

The ZEN pangolin has her own guard throughout the day, to protect her and to take her out on walks to find her food source – ants.  You’ll get a clue about how she extracts ants from their nest in this short video clip where she reveals her technique.

Pangolins walk in the most intriguing way – on their hind legs.  I thought you’d like to see this little one in action:

And of course, no visit to ZEN is complete without checking in with Mambo, the Lion King himself.  It’s hard to think he was once a little cub who slept on Roxy’s son’s bed, but it’s true.  Now aged 15, he has a lioness to cuddle.  Looking at those teeth, it’s just as well! After visiting all the animals, the Mindful Safarians are in need of refreshments.  ZEN excels in all aspects of catering.  Sitting in Indian-styled tents, enjoying tea from bone china cups, served from silver teapots, we enjoyed a banquet of high tea offerings as, around us, the elephant and giraffe and wildebeest and kudu enjoyed their evening meal. At such moments, it’s hard to think of a more enthralling and magical place.  There’s certainly nowhere else on earth one would rather be. Can you bring some of those cucumber sandwiches down here too, please?! The sun sets quickly in the sub-tropics.  At ZEN that means the lamps are lit, the Prosecco is poured, and as the elephants wend their way to the stables where they’ll be kept warm and comforted through the night, we all have a chance to let the wonder of the day sink in. Roxy Danckwerts is not only dedicated to ensuring that her orphaned elephants survive and thrive, but also to their “re-wilding.”  As they get older, the orphans form their own herd, and when they reach maturity, their human companions step back to allow nature to take its course.  When they are ready and self-sufficient, the elephants are transported to a protected area in the bush where they can be free once more.  One group has already successfully made the transition, and it’s a bittersweet achievement for Roxy and her team to see the little ones they rescued, now returned to the wild. There are very few people who have dedicated so much energy, focus and commitment to the protection of orphaned elephants as Roxy.  A trailblazer in Zimbabwe, and admired throughout the world for the work that she does, it is an enormous privilege, as well as a joy, for our Mindful Safari group to be able to visit Zimbabwe Elephant Nursery and to support her work.

Like other animal rescue organisations in Zimbabwe, Wild is Life/ZEN is highly dependent on philanthropy.  There are a number of things you can do to help:

Make a donation at: https://www.zimbabweelephantnursery.com/

Spread the word about the amazing work that Roxy and her team do.

We plan returning to Zimbabwe Elephant Nursery as an add-on to Mindful Safari in August 2020.  If you’d like to join us, find out more on the following link.  At the time of posting this blog, in late September 2019, there are only four rooms left, so please email us urgently to secure your place.  Go to: https://www.davidmichie.com/mindful-safari/