After Mindful Safari and our Meditate with Elephants experience this year (see blog: https://davidmichie.com/the-magic-of-meditating-with-elephants/)  a few of our group had time before flying home to visit The Twala Trust Animal Sanctuary just outside Harare.  When I think of Twala, that famous quote of Mahatma Gandhi often comes to mind: “The greatness of a nation and its moral progress can be judged by the way in which its animals are treated.”

Animals have no rights and no voice and are among the first victims when hardship strikes humans.  And during the past twenty years, Zimbabwe has been through economic and social crisis.  Most commercial agriculture, mining and manufacturing activity has come to an end, fewer than 10% of people are employed, and more than 3 million Zimbabweans have been forced to leave the country to find work (i.e. 20 per cent of the total population).

Where has all this left Zimbabwe’s animals and pets?

It was exactly this concern that prompted Sarah Carter and vet Dr. Viney Ramlaul to set up The Twala Animal Sanctuary, creating a home for a wide variety of wildlife, farm and domestic animals and birds.  Twala is a place of refuge for the pets of people who left the country and couldn’t take their beloved companions with them.  Migration from Zimbabwe has taken place in waves, during which pets were often re-homed and then re-homed again as people continued to leave.  At Twala, they are, at last, offered a forever home.

Below: the beautiful countryside around Twala. 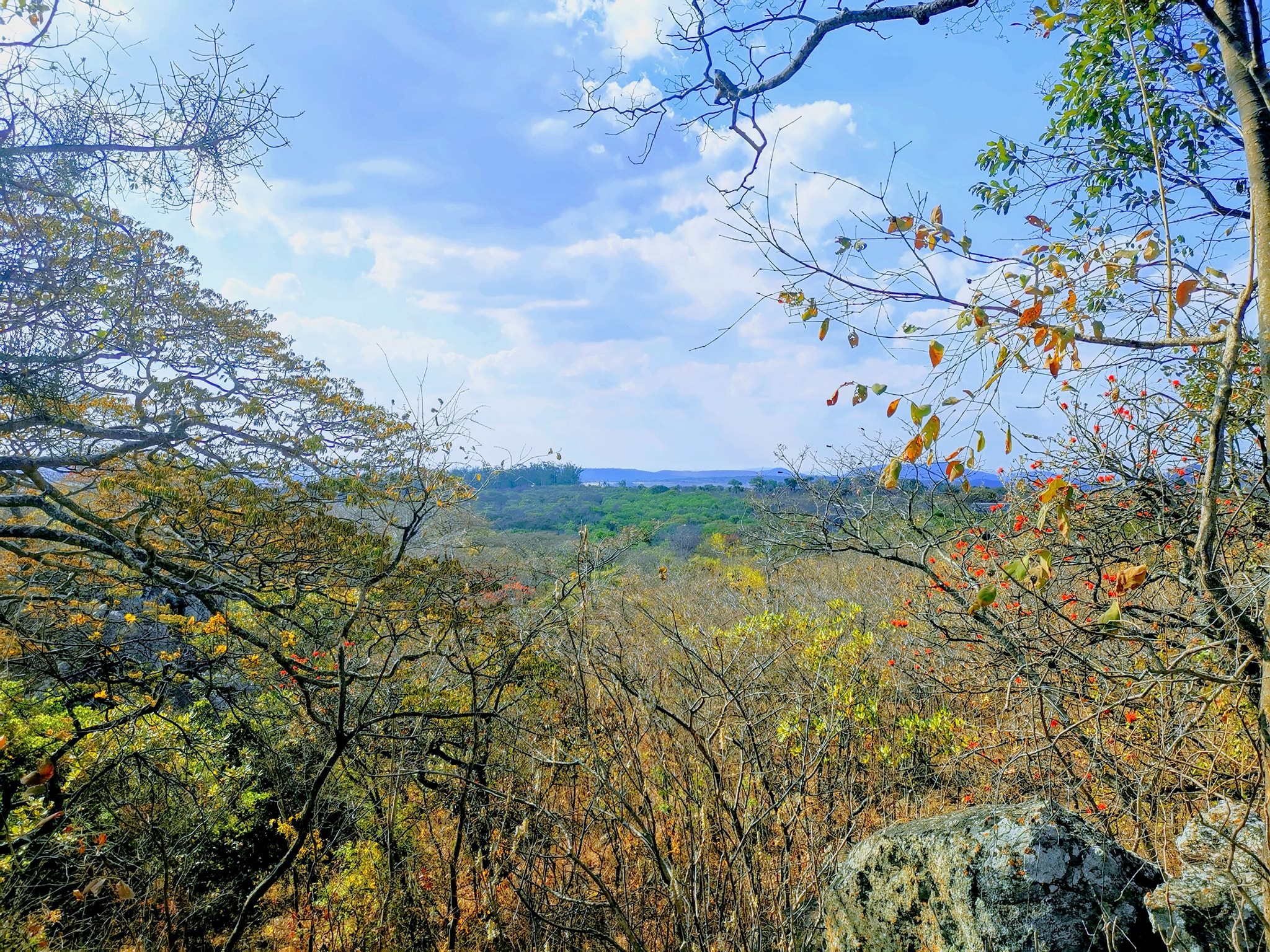 Because Twala takes all creatures, great and small, native and exotic, the result is a glorious fusion of different creatures.  And from this arises unforeseen and heart-warming relationships as different beings, sometimes from different species, reveal their capacity to nurture, befriend and sometimes even mother others in need.

At the top of this article, Horace the vervet monkey is shown inspecting Computer the dog for fleas.  Horace was rescued as a baby, and quickly became a celebrity not only at Twala but, thanks to Facebook, internationally.  Mothered by a tabby cat called Tiger Lily, who is often to be found lounging in the sunshine, he grew into the mischievous and raffish young fellow that he is today.  Unfortunately, an incident with an uninsulated power line led to an electric shock destroying his front right paw, which had to be amputated.  In many ways he is lucky to have survived.  He certainly shows no signs of letting his paw deficit get in the way of leading a full and active life.  One of his favourite daily outings is going for walks with the Waggley Tail Club which comprises 50 rescue dogs.  He insists on being part of this daily ritual, even when he sometimes gets in the way … 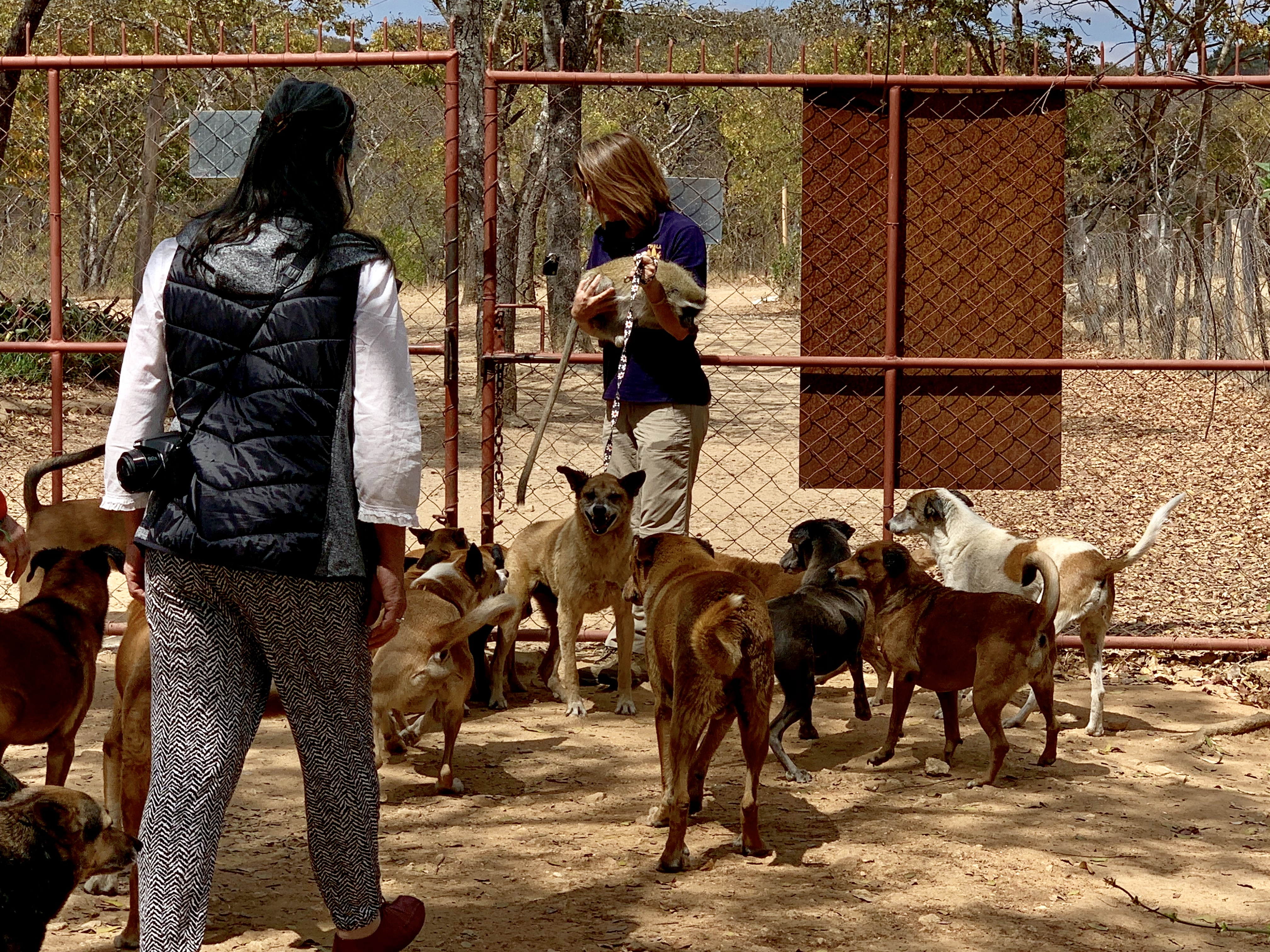 But there’s always a human to hold onto, like Sarah, his human Mum … 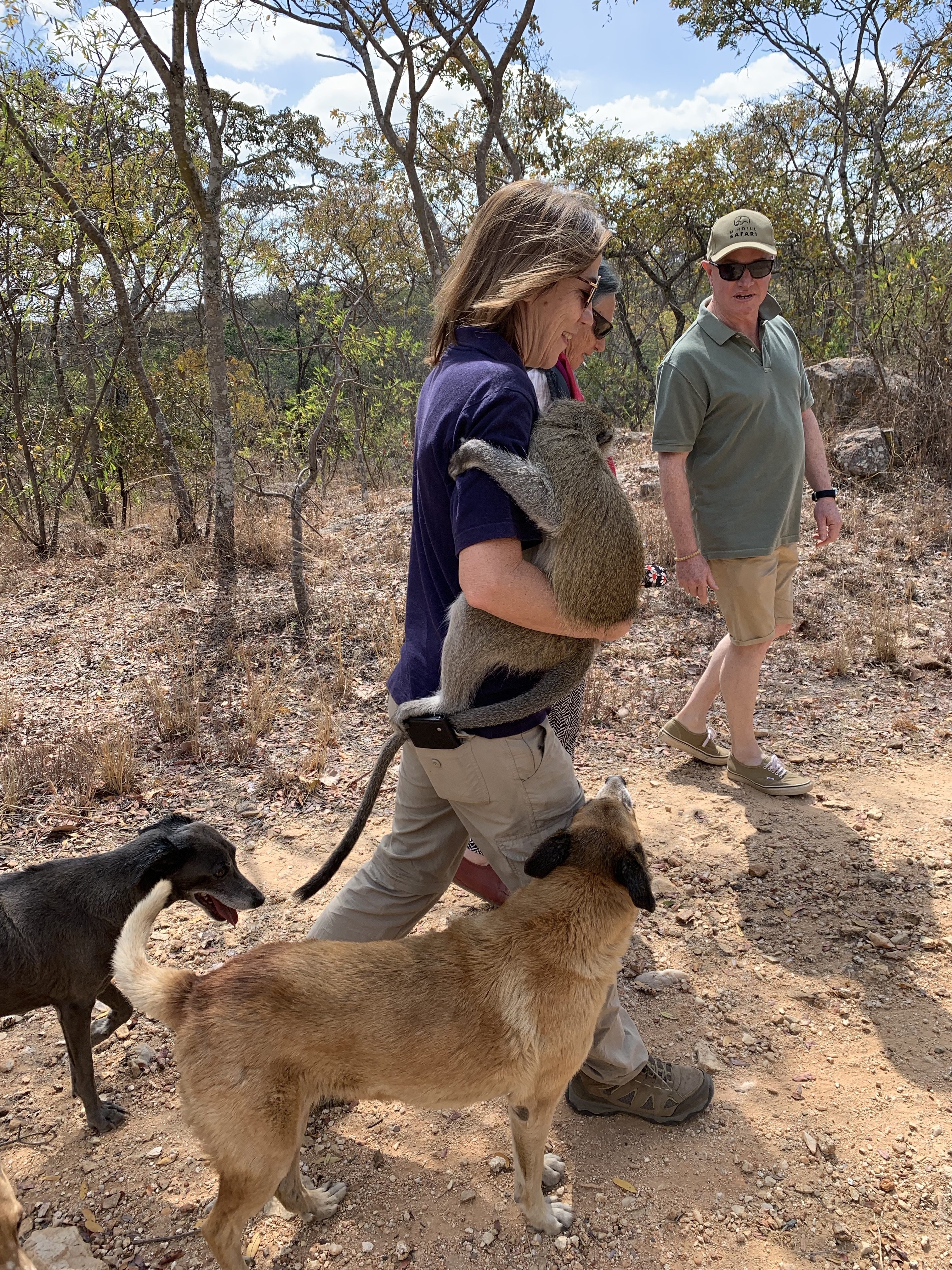 and fun to be had with the dogs at the dam. 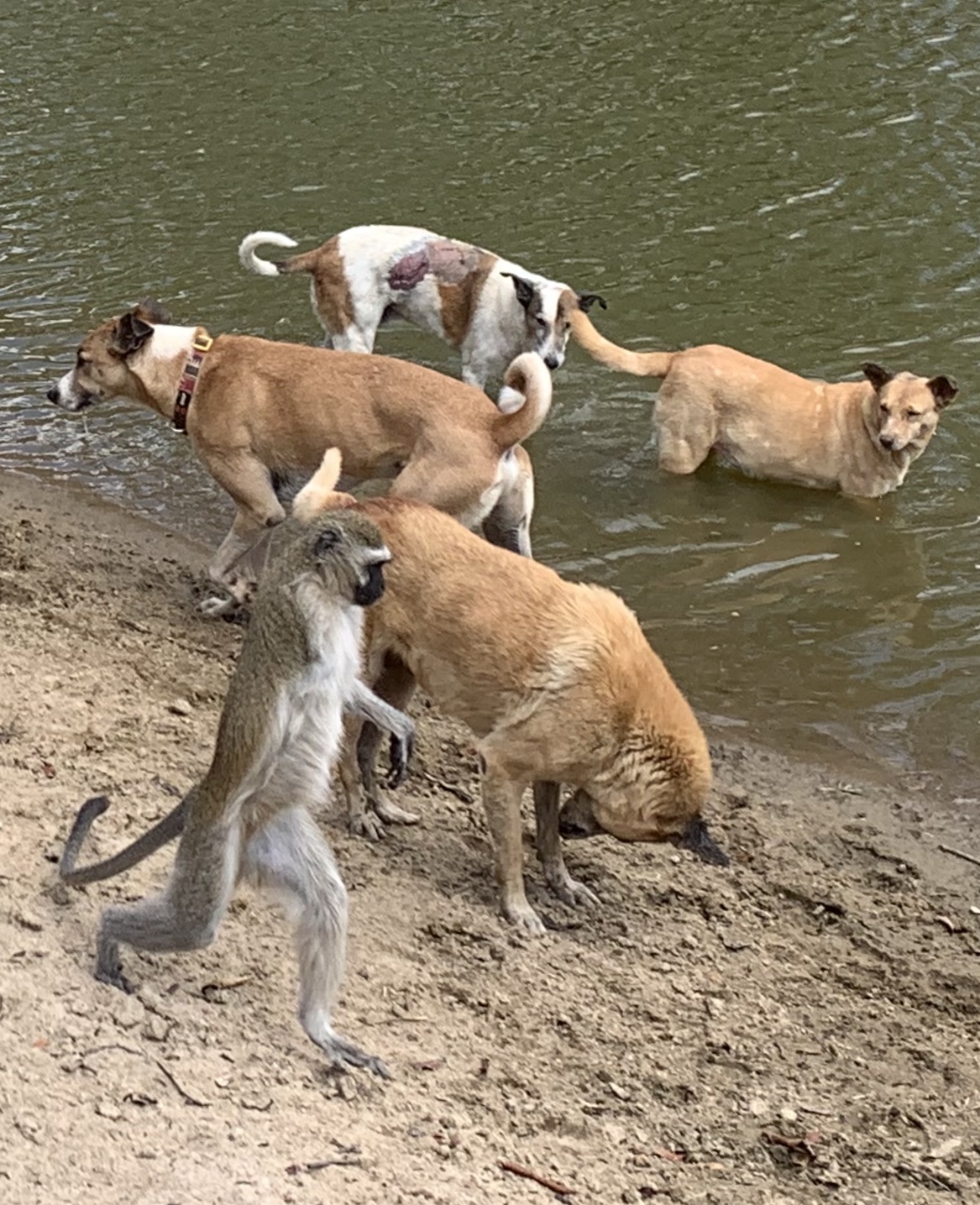 Mathematics and Tinkerbelle, members of the Waggley Tail Club, were rescued from years of abuse and neglect and understand the preciousness of a second chance at happiness.  The love and care they receive at Twala has helped put these two broken little beings back together again. 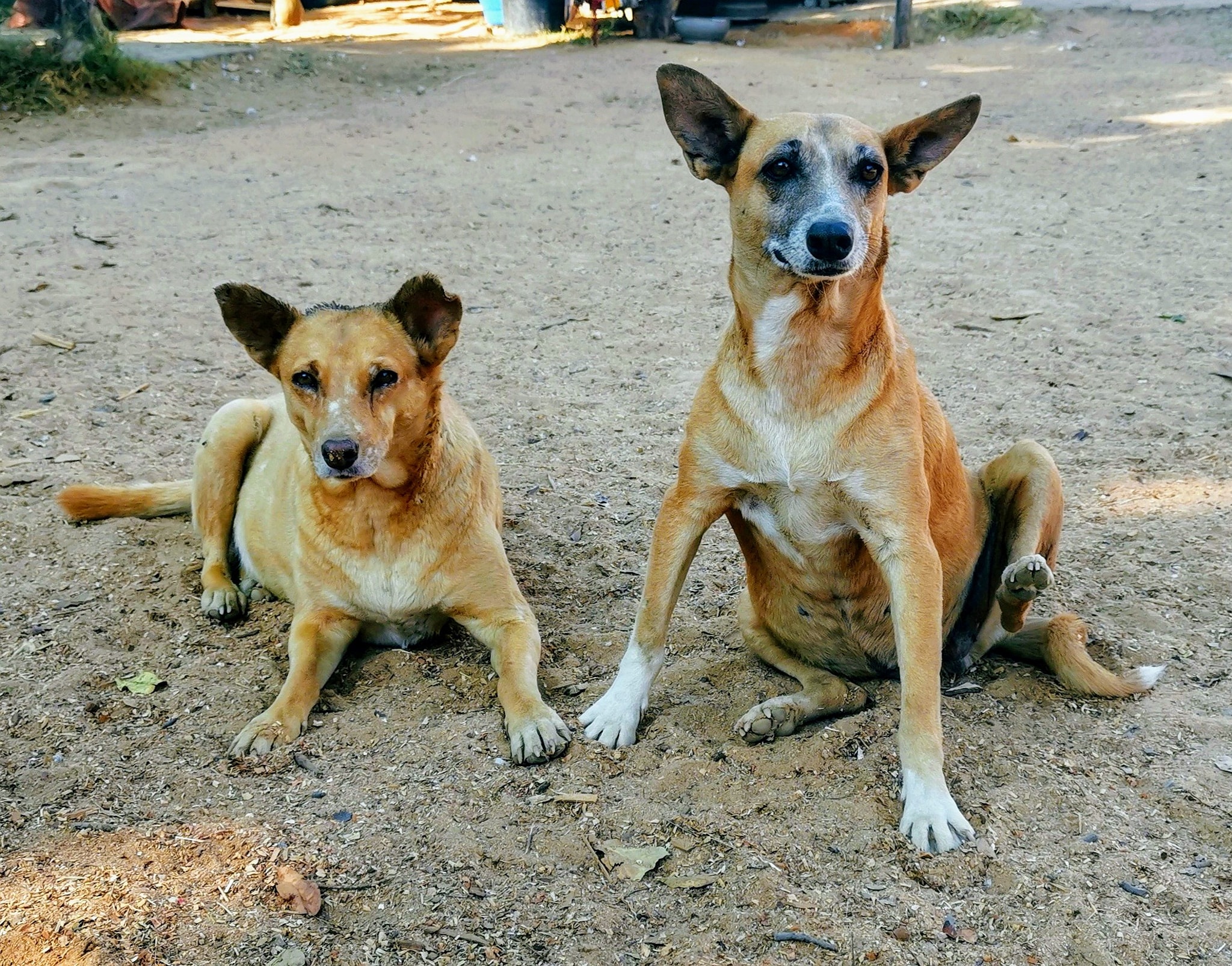 Our small group of Mindful Safarians really enjoyed the bush walk with Horace and the dogs.  Given that a number of us come from Australia, we were surprised to find raucous, avian compatriots keen to meet us back at the ranch.  In true, Aussie style, there was no standing on ceremony.  They immediately commandeered all available shoulders and arms. 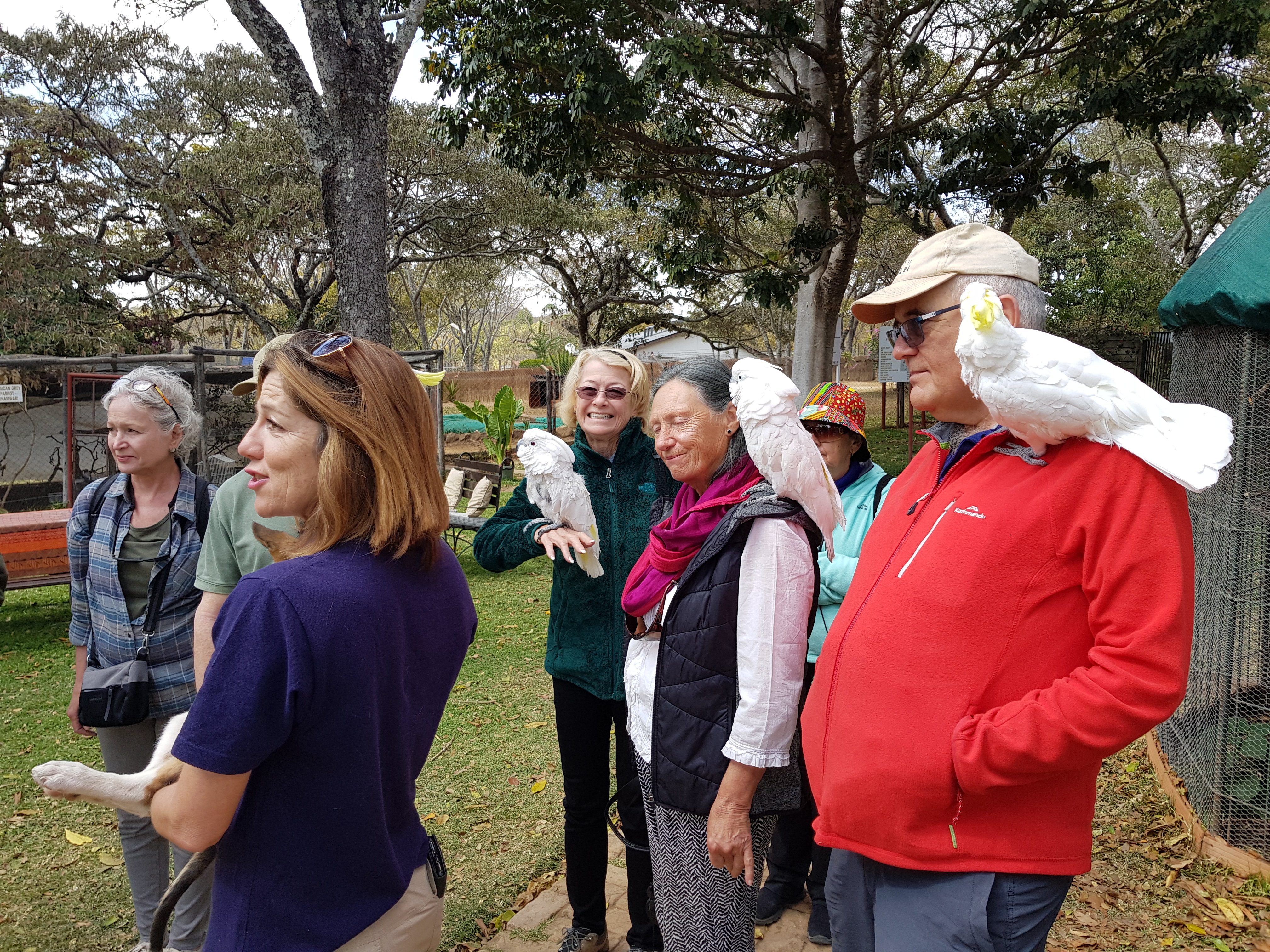 And when tea and biscuits were served, they quickly took over those too … 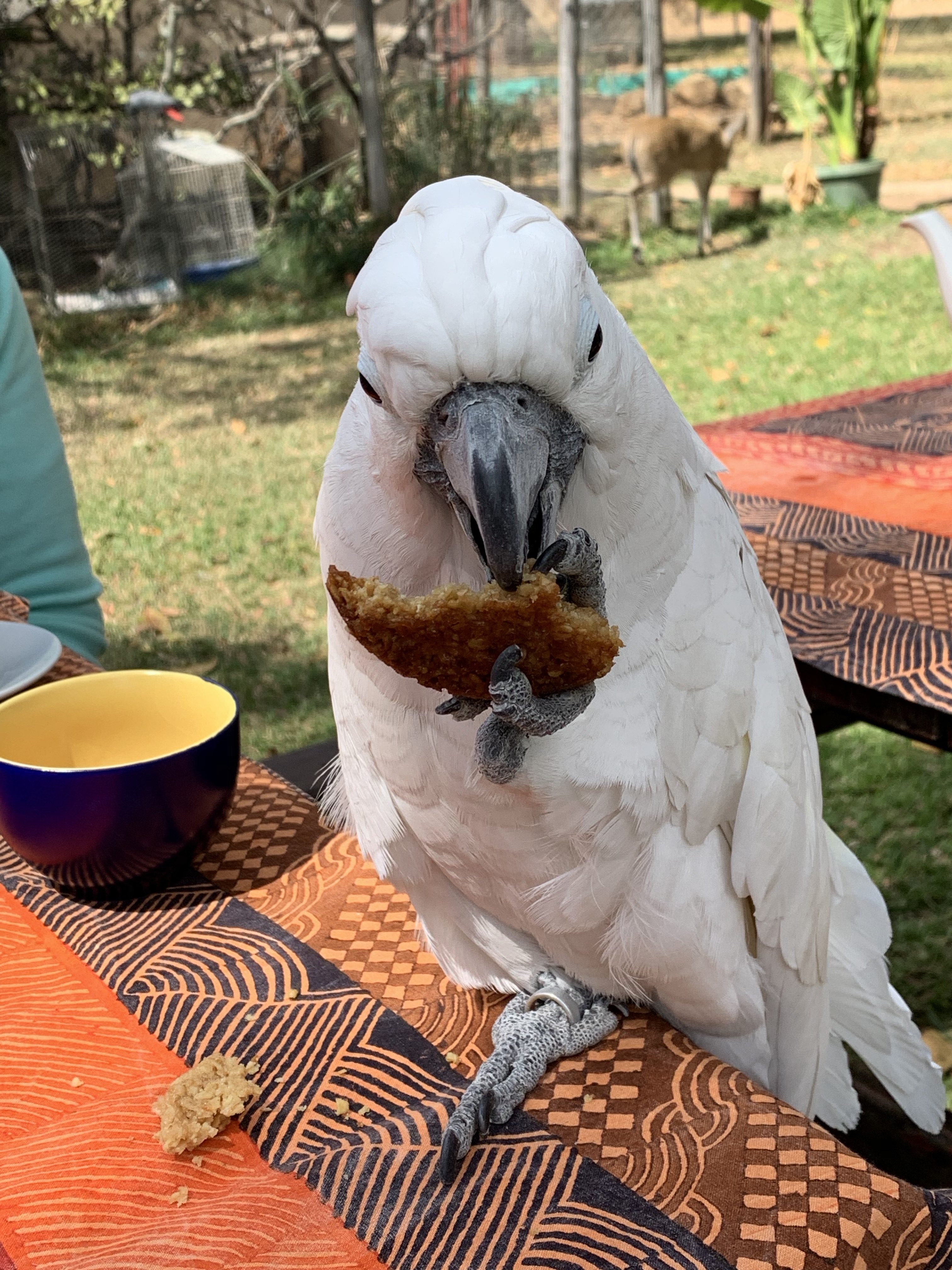 On our tour of Twala we got to meet many of the residents include rescue lions Shungu and Shani.  Here Shungu demonstrates exactly why lions are so well camouflaged, able to stalk unnoticed extremely close to their prey.  Check out Shungu’s magnificent mane! 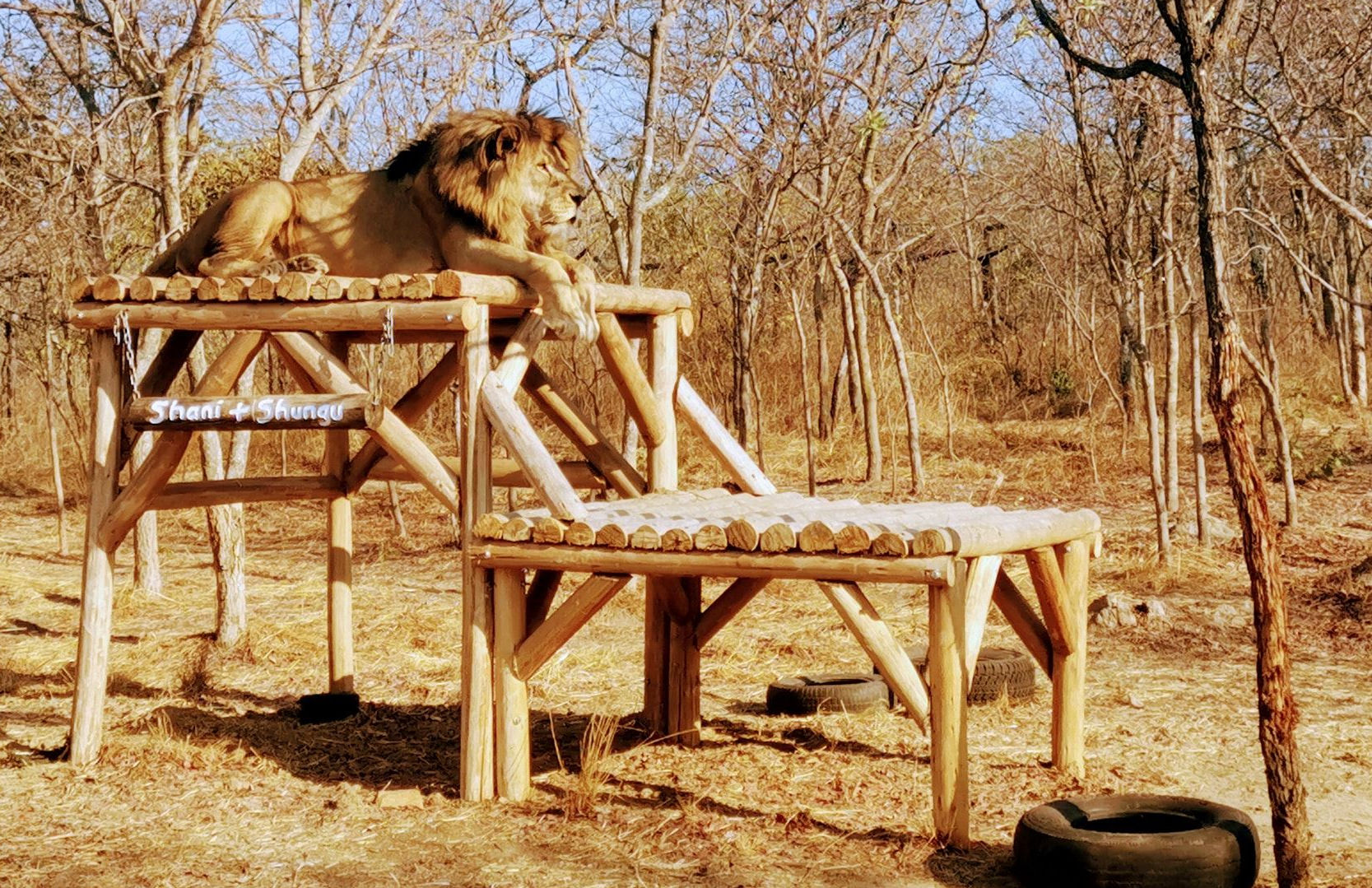 George the rescue kitten and Ziggy the genet make up one of the delightful odd couples at Twala, growing up together.  Genets are cat-like but are not cats, belonging to the viverrid family of mammals. 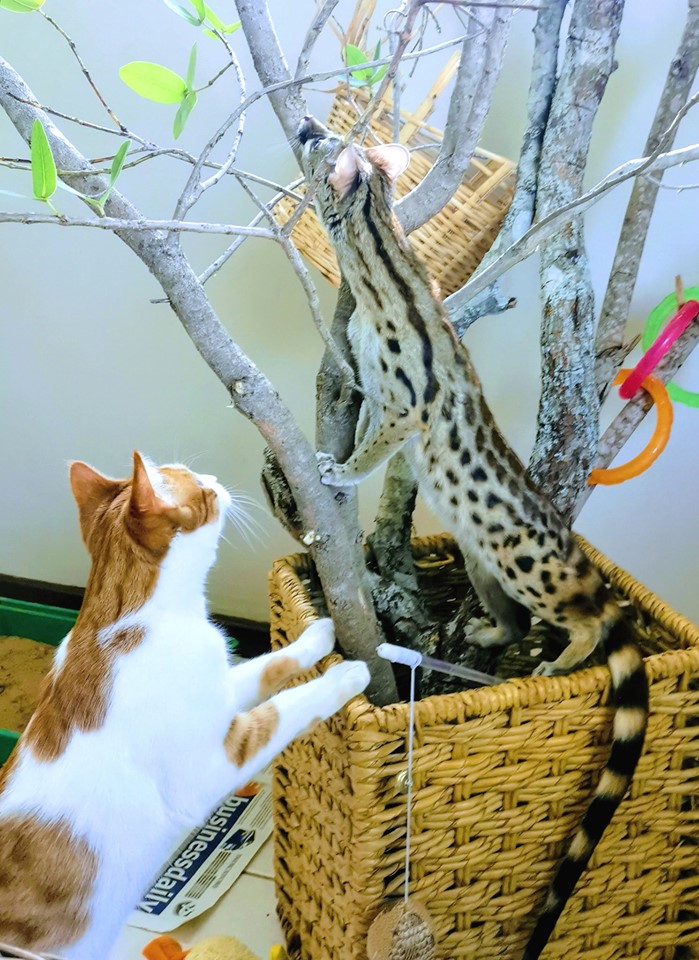 They make for the most photogenic pair. 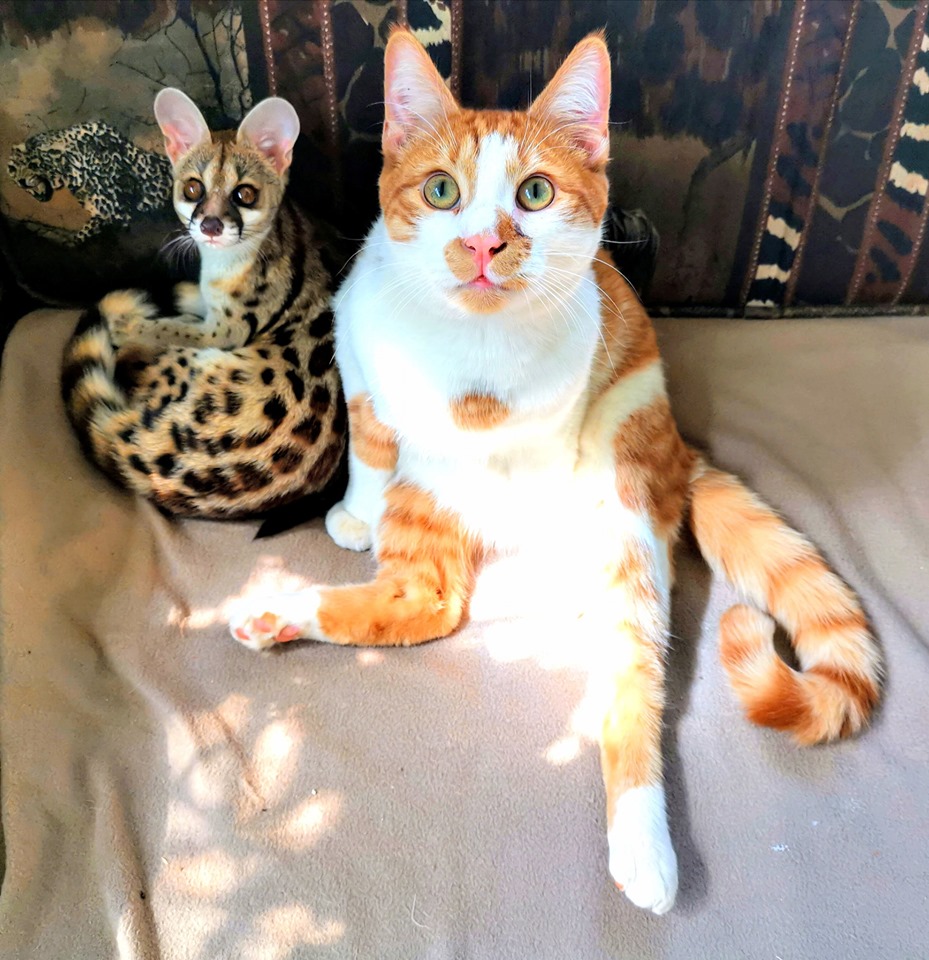 Here, I was reciting mantras to lioness Kadiki when, without me realising, Simon the marmalade cat decided he wanted to join in too. For those of you who know the Tara mantra, I have found it is popular with cats – here, as you can see, of all sizes! These are just a few personal photographic highlights from our time at Twala.  Other people were no doubt drawn to other animals and activities.  What all of us who visited shared, however, was a sense of profound gratitude towards Sarah, Vinnie, Colin and the staff, for the extraordinary work that they do.  In addition to taking on all-comers, Vinnie also goes into a nearby high density township where he treats pets and distributes pet food free of charge.  Without this service, there would be untold suffering in the lives of many creatures.

It is truly humbling to encounter people who devote their life not to their own material well-being, but to the service of animals who have been abandoned or who’ve fallen through the cracks and who, quite simply, wouldn’t be alive, if it wasn’t for their unfailing willingness to put others first.  To paraphrase Mahatma Gandhi, the greatness of an individual can be judged by the way they treat animals.  In my view, those who devote their lives to the care of our most vulnerable, fellow sentient beings are worthy of our greatest respect.

Sarah didn’t ask me to write this blog and has never even hinted at the idea that I should ask for donations for Twala.  I feel sure that some readers may want to know what they can do to help. At this time of the year, most of us receive so many charity appeals, but you can be sure that every cent you donate to Twala will go to help animals who desperately need it.  If  you would like to support Sarah, Vinnie and their team:

Donate to Twala.  And remember, given the economic meltdown, even very small amounts of foreign currency donations go far in Zimbabwe: https://www.paynow.co.zw/Payment/Find?search=sarah%40twalatrust.co.zw

Below: the road to many sentient beings’ forever home …