When I was growing up, Dr Dolittle wasn’t so much my hero as my role model!  Just like him, I could think of nothing better than to be able to talk to the animals, walk with the animals and chatter to a chimp in chimpanzee!

Much later in life, my boyhood dreams well behind me, I learned to meditate.  My initial reason for doing this was to deal with stress.  While meditation is, of course, highly effective as a stress management tool, I soon came to discover that its myriad benefits go well beyond that.

When it comes to animals in particular, I have found that through meditation, while we may not be able to talk to them as we do other humans, by putting ourselves on the same page as them, we open up the possibilities of a whole new way of connecting.

In fact, meditating in the presence of animals can be among the most rewarding of interactions.  Sitting quietly together may, on the surface of it, seem unexceptional.  But you shouldn’t be fooled by appearances.  Not a lot may be going on physically, compared to exchanging hugs and caresses.  But on a more subtle level, a great deal may be going on. 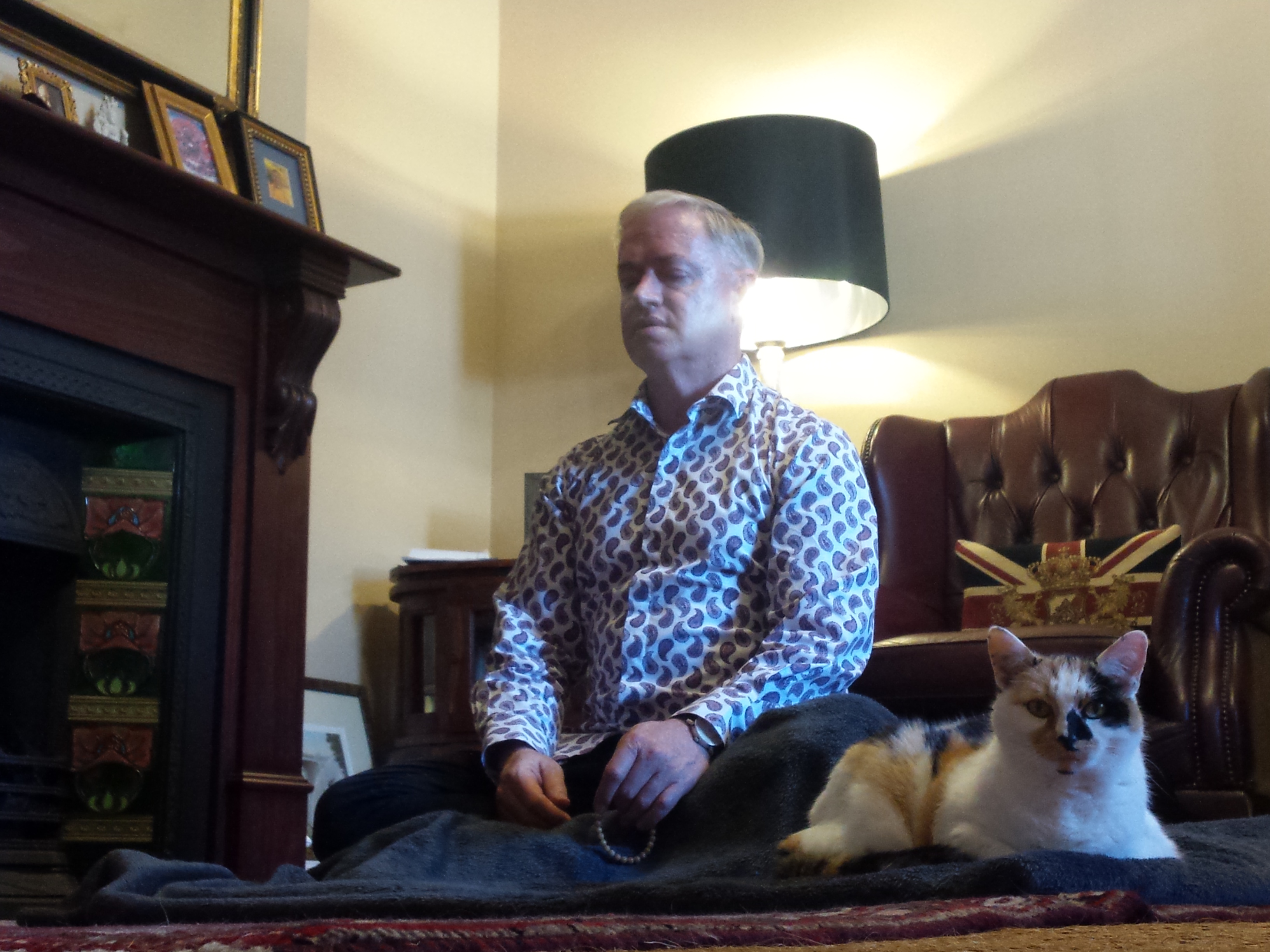 I discuss this subject in my book, Buddhism for Pet Lovers, which has whole chapters devoted to the benefits of practising meditation with our pets.

But what about animals who are not pets?  Those that may be “wild” or perhaps only partly used to humans?  Given that such beings instinctively regard humans as a threat, predator and/or prey, and almost always as something to be kept at a distance, can a practice as subtle and, one might think, uniquely human as meditation have any effect on “wild” animals at all?

Regular readers of my blog will know that for the past few years I have been leading groups on Mindful Safari to Africa, where I was born and grew up.  We combine gentle, guided meditation sessions in the bush every day with game viewing.  And it has been the experience of every group I’ve gone out with that we’ve been incredibly fortunate with the close, animal encounters we’ve had.  Have we just been lucky?  Or has something else been going on? 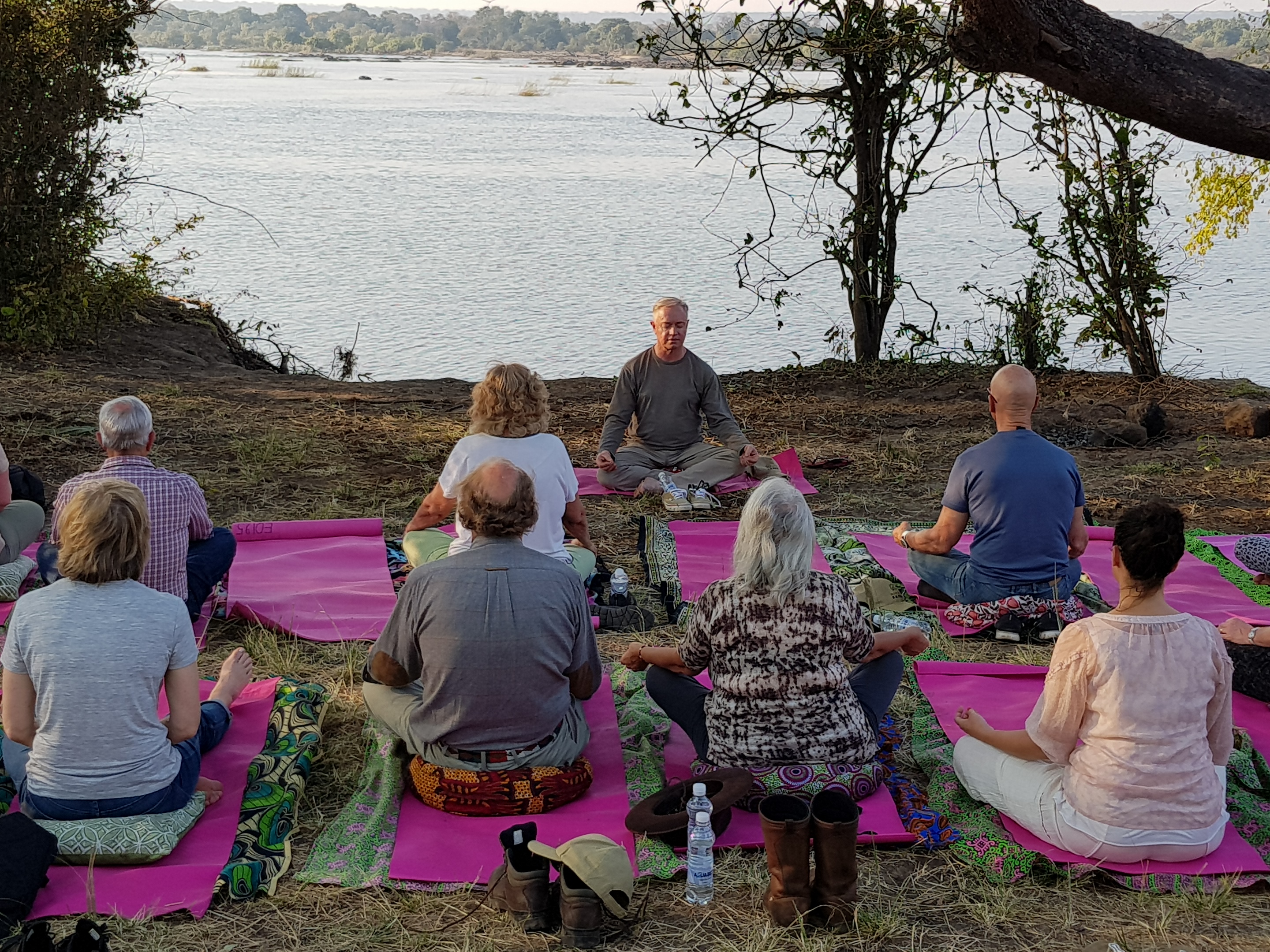 My view is that wild animals tune into human behaviour perhaps even more than our own pets, who have long-since become used to our peculiar ways. In the bush, animals may not always appear to be observing us. But their instinct for survival, compelling and ever-present, means that when we show up, they are paying close attention.  And the nature of their attention may be of a very different quality to our own.

What do I mean by that?  As verbal beings we have huge vocabularies and talk a lot – approximately 16,000 words a day, according to a study published in Scientific American magazine.   If we say 16,000 words a day, on average, how many thoughts do we have?  What would the impact of having far fewer words and thoughts be overall?  Would it not be that we’d free up a lot of mental bandwidth?  With a more settled mind would we be able to perceive things we can’t currently perceive?  Notice things that, because of our perpetual agitation, we have actually come to believe are impossible to notice?

There is a useful analogy of a glass of storm water scooped from the gutter.  If you were to hold such a glass up, you wouldn’t see much except a whole lot of swirling sediment.  Rest the glass of water on a counter for half an hour, allowing the sediment to settle, and what you get is clarity.  You can see right through the water to what is beyond without any effort or super-human skills.  What if, out in the bush, animals who have much quieter minds than ours, are not simply observing our body-language?  What if they are also tuning into our mental state, on some level?

In another blog I have written about the impact of living close to nature on the human mind.  I illustrated with a real-life story of a woman living in Mongolia who accepted as matter-of-fact what we would regard as a clairvoyant premonition (https://davidmichie.com/what-happens-to-our-mind-when-we-go-into-nature/).  The writings of Laurens van der Post about the San people tell similar stories.  When minds are quiet, our capacity to perceive more subtle phenomena is dramatically enhanced. 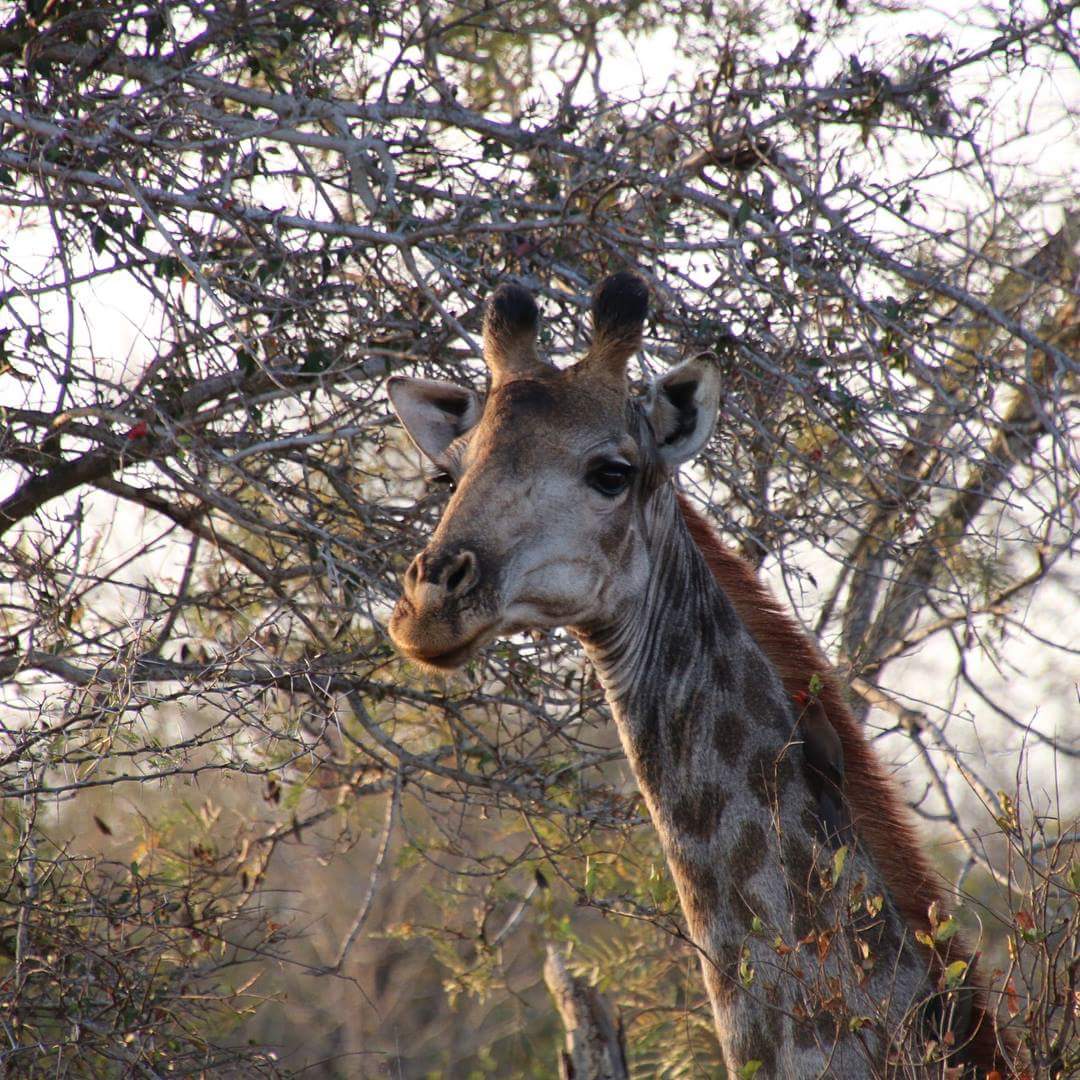 Could this also be true of wild animals?  As non-verbal beings, with less agitated minds, who routinely communicate in more subtle ways, is it possible that they may also pick up on the intentions and mental states of people, in a way we might find bordering on the telepathic?  For example, are they more relaxed and open when we are relaxed and open?  Can they tell the difference between people who simply see them as entertainment – or worse – versus those who approach them from a place of benevolence and compassion?    Are they more willing to allow us closer into their presence and perhaps reveal more of themselves to us when they sense a heartfelt yearning for connection on our side?

It would be fascinating to see proper research done on this.  Because, anecdotally, this seems to be the case.  Time after time, on Mindful Safari, our game rangers have told us that we’ve seen things that are incredibly rare, even unprecedented.  On this year’s visit to Chamabonda National Park near Victoria Falls, for example, our group was in a hide overlooking a watering hole, where not one but three herds of elephants converged – a total of over 100.  They drank, and rolled in the mud, and gave themselves dust baths completely unconcerned by our presence.  In a curious kind of way, it felt like being admitted to their presence. Becoming, for a couple of hours, elephant insiders.  And it all felt perfectly natural.

On different occasions, we have had herds of elephant walk so close beside our vehicles, and pause to look at us, that it almost felt as though we were as interesting to them as they were to us.  One of our group, not given to flights of fancy, talked about how strongly he felt connected to a particular bull elephant that stopped and looked directly at him.  He felt the powerful sense that, in that moment, the elephant was conveying to him the unexpected, and profoundly peaceful sensation, that “all is well.”  At times like these, we can see why some regard animals as teachers, and why different beings have totemic values among many cultures.

Cats are also highly response to meditation as most cat-loving meditators know.  I often joke how I am “a pussy magnet” because when I sit down to meditate, it is unusual for me not to be joined by a cat within a few minutes!  I’ve found that domestic cats seem to love mantras and on this year’s visit to the amazing Twala Trust Animal Sanctuary near Harare, Zimbabwe I discovered that it’s not only domestic cats who like them.

It was my great privilege to be allowed to sit near an enclosure occupied by a lioness called Kadiki, who sadly cannot be returned to the wild.  Sitting in a chair, reciting Tara mantras, Kadiki responded just as a domestic cat would, rubbing herself against the wire fence – it would have been against me had there been no fence! – lifting her head and self-evidently enjoying the moment.  It was only after a while that Sarah Carter, who founded Twala, pointed out that Simon, a domestic cat, had emerged from the garden, attracted by what was going on, and was sitting under my chair responding in exactly the same way as Kadiki the lioness! 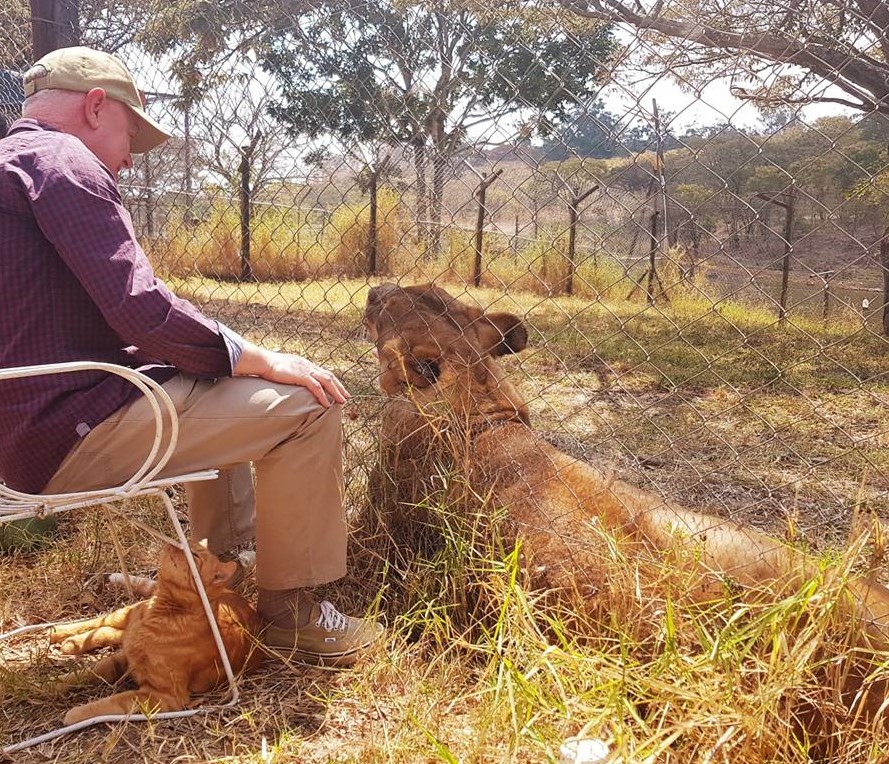 Also near Harare, Zimbabwe is the extraordinary Zimbabwe Elephant Nursery (ZEN) a place where very young orphaned elephants who have lost their parents – often shot for their tusks – are taken in, nurtured, and introduced to a new family herd.  Not many people are aware, but a baby elephant can’t survive on milk alone.  Without the presence of a surrogate mother, 24 hours a day, they will die of emotional distress.

At ZEN, orphaned elephants are given all the food and love they need to help them through their trauma and offer a semblance of a family life.  As with the Sheldrick Foundation in Kenya, they are raised together with other orphans to a point when they can be “re-wilded”: introduced to a protected part of the country where they will be safe and ultimately re-integrate with existing elephant herds.

Visiting ZEN a few months ago, owner Roxy Danckwerts offered me the special chance to offer healing meditation for six week old Unity.  Drawing on meditation techniques I have learned, I tried to offer peace and connection.  From my side, there were simply no words for the encounter.

I also met and touched foreheads with the very special Kukurukura.  I sensed such strength and also gentleness, such powerful presence.  I had no doubt at all that she, like other elephants, operates on a different level of perception and understanding, one that requires no words but connects at a deeper level. 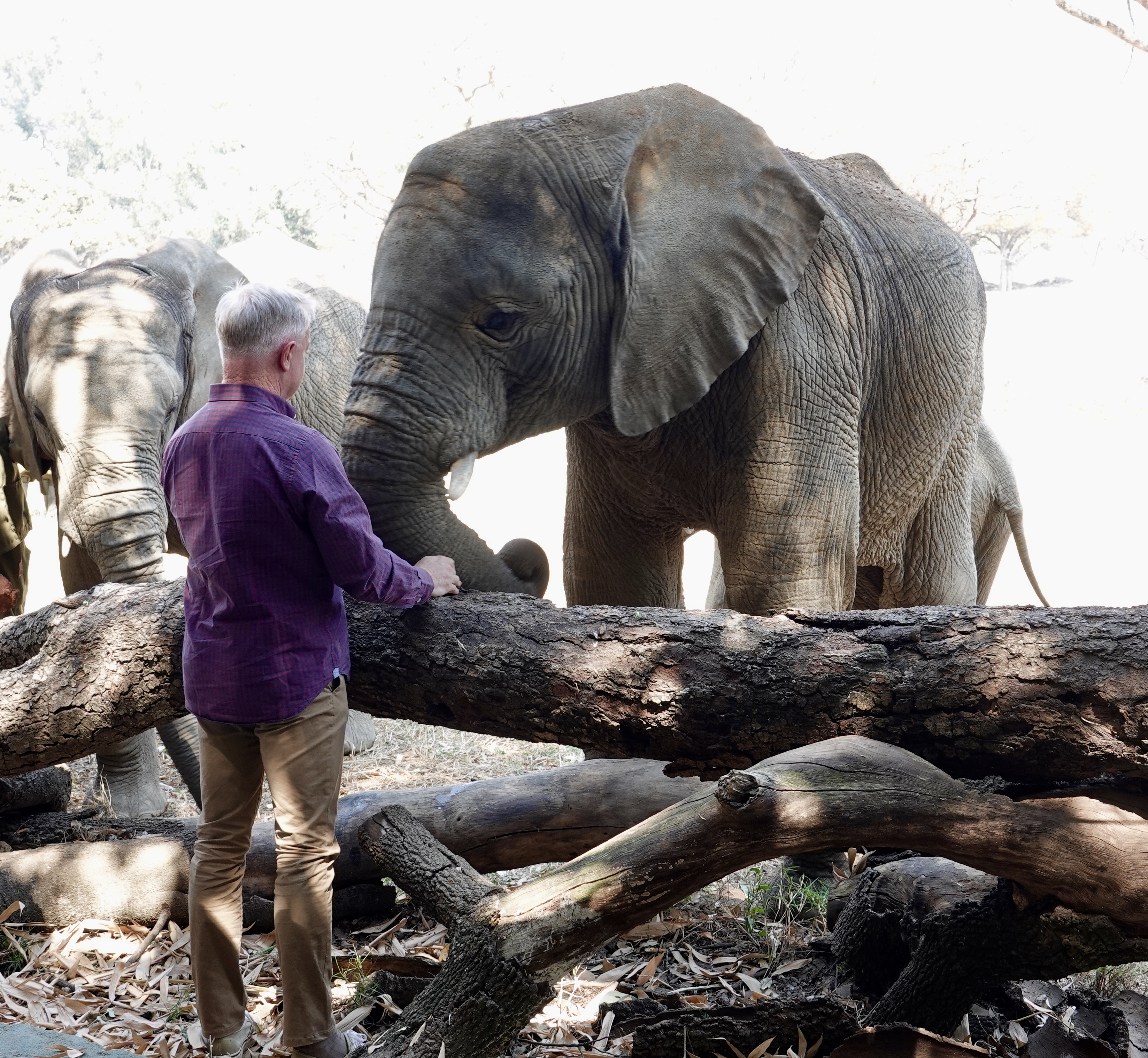 In summary, wild animals seem just as attuned as domestic ones to the shift in state we create when we meditate – if not more attuned.  They seem to respond to our calm presence and, if we cultivate it, our compassion and benevolence with a reciprocal calm and openness.  There is nothing mystical or magical about this – although the experience can feel very special.  It is, instead, what naturally occurs when we let go of narrative chatter and get on the same page as less agitated beings.  We remain human and they elephant, lion or giraffe.  But for a while, in a more fundamental way, there are simply two consciousnesses abiding in the same moment, connected in mutual recognition of the extraordinary wonder of being alive, together, in this moment.  Such encounters truly are beyond words.

To learn more about The Twala Trust Animal Sanctuary and Zimbabwe Elephant Nursery, and to donate to these extremely worthy causes, please go to

I hope you enjoyed this blog!  If you did (or even if you didn’t!) here’s a few things you can do:

OTHER BLOGS YOU MAY ENJOY:

The Fascinating Science behind Mindful Safari