I was brought up in a church-going Presbyterian family, and during my formative years I developed a view of Jesus which remained pretty much constant.

It’s only late in life that I’ve come to discover how a number of important messages, which I took to be core to Christianity, may actually be much more a product of early church politics than what Jesus was really about.  I understood the unalterable teachings to be that God was an Almighty Being, entirely Other and separate from me; that I suffered because I was innately sinful and would go to hell when I died; that the only way out of this dire situation was to believe in Jesus; and that everyone’s salvation – or lack of it – would ultimately be resolved during an epoch-changing historical event.

It turns out, however, that very different interpretations of Jesus’s teachings were treasured by some of his closest followers.  As far as they were concerned, his teachings were that God is within; that suffering is caused by ignorance about who and what we really are; that the way out of suffering is to cease identifying with our conventional self and to identify instead with our divine nature; and that everyone’s salvation – or lack of it – will depend on this journey of inner transformation. 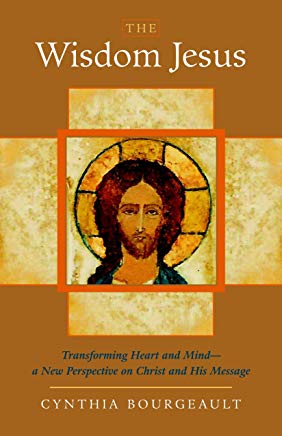 Kenosis and letting go of the false sense of self

I first came across this alternative perspective, in a fascinating book by Episcopal priest and teacher Cynthia Bourgeault, PhD called ‘The Wisdom Jesus.’  What I found so remarkable were the similarities in messages between Jesus and Buddha.  It was almost as if Buddhist teachings had been packaged into a format that would be understandable to a Jewish audience.  Whether we talk of ‘divine nature’ or ‘ultimate reality’, we are only using concepts to point to something that is necessarily non-conceptual.  And both the non-conceptual goal and the means of getting there were, it seemed, at the heart of both Buddha’s and Jesus’s teachings.

Specifically, Cynthia Bourgeault emphasizes that the path of inner transformation taught by Jesus was one of kenosis, from a Greek verb meaning “to let go” or “to empty oneself’:

“Underlying all his teaching is a clarion call to a radical shift in consciousness: away from the alienation and polarization of the egoic operating system and into the unified field of divine abundance that can be perceived only through the heart.”

We might also see Buddha’s most important message as letting go of the false sense of self in order to open ourselves to an experience of reality that is lucid, boundless and blissful.  The very term Buddha actually means “awake” – in particular, awake to the true nature of reality.  And Buddhist meditation guides us to a direct, first hand experience of this truth.

Writing about this fundamental shift in perspective, Bourgeault observes:

“The brilliant, visionary scholar Raimon Panikkar and the popular Franciscan teacher Richard Rohr have both made it the cornerstone of their own teachings and see it as the tie-rod connecting Christianity not only to its own deepest wisdom but also the fluid, relational nature of consciousness itself as mirrored in Eastern spiritual thought and in modern quantum physics.”

When I read these lines, I was instantly reminded of Albert Einstein’s famous saying that “The true value of a human being can be found in the degree to which he has attained liberation from the self.”

Orthodox and Gnostics: Why one set of interpretations prevailed

Why is it that most presentations of Jesus’s teachings in the world today are so different from those I’ve just described?  Cynthia Bourgeault says that ‘Christianity, as a religion, got off on the wrong foot from the start.’  In the early years after Jesus, his followers were fragmented, each with their own views about what he taught and the emphasis to be placed on one set of messages or another.

Over time these coalesced into two main groupings.  One group, wishing to live as much as possible in accordance with his teachings of  peace-on-earth and goodwill-to-all-men, sought to create a universal church, in which everyone could become a member of the same, human family.  People could become a part of this Utopian vision, instantly, by signing up to certain credal beliefs and taking part in rituals associated with the most pivotal moments of their lives – birth, marriage and death.  All this was overseen by bishops and priests, initially appointed by several of the followers to whom Jesus had appeared after his crucifixion, and whose authority was, by this very experience, preserved for all time.

For another group, Jesus’s teachings had little to do with joining a club or participating in community rituals.  To them, spirituality was a process of seeking to experience the divine within.  For this reason they became known as ‘gnostics’, from the Greek word ‘gnosis’ meaning the personal experience of insight.  The gnostic experience was a process requiring much time, effort and self-discipline, making it unattainable, and possibly unattractive to many people. Oral teachings were passed from teacher to student, when the former considered the latter to be ready, irrespective of whether they were male, female, priest or lay person.  Spiritual development wasn’t something others could do for you – nor did the title of priest or bishop automatically bestow any particular insights.  There was little formal structure, and while pursuing this necessarily solitary pursuit, what really counted was not stated belief and ritual, but direct, personal experience.

You don’t have to be a social scientist to understand why one of these two groups prevailed over the other.  And history, as they say, is written by the winners.  By 200 AD, the first group had taken full control of the Jesus narrative, condemning alternative views as heretic, banning their literature and suppressing their adherents with the same zeal as Middle Eastern despots of our own era.

In the words of Elaine Pagels, Professor of Religion at Princeton University:

“What we call Christianity – and what we identify as Christian tradition – actually represents only a small selection of specific sources, chosen from among dozens of others.  Who made that selection, and for what reasons?  Why were these other writings excluded and banned as ‘heresy’?  What made them so dangerous?’

In Elaine Pagels’ fascinating book, ‘The Gnostic Gospels,’ she relates how the discovery of a treasure trove of suppressed gnostic literature in 1945 has blown open a whole new dimension in our understanding of Jesus’s teachings.

One of the gems from her book quoting The Gospel of Thomas reads:

‘According to the Gospel of Thomas, Jesus ridiculed those who thought of the ‘Kingdom of God’ in literal terms, as if it were a specific place: If those who lead you say to you, “look, the Kingdom is in the sky,” then the birds will arrive there before you. If they say to you, “It is in the sea,’’ then, he says, the fish will arrive before you. Instead, it is a state of self-discovery.

When I read this, I was reminded of the Buddhist analogy of a very poor man being told there was a treasure chest just below the mud floor of his hut.  What would he do?  Lay his hands on whatever he needed to remove the dirt until he revealed the treasure.  The meaning is that we are all possessors of inestimable treasures, right there, just under the surface of our consciousness.  By using whatever tools we can to remove the obscurations of conceptual chatter, we, too, can reveal the extraordinary wealth that is our own true nature, which is inside, outside, above and beyond.  If we don’t do this, it is indeed we who dwell in poverty and who are that poverty.

For those interested in exploring this subject, I would highly recommend both Cynthia Bourgeault’s The Wisdom Jesus and Elaine Pagel’s The Gnostic Gospels.

Buddha purportedly gave 84,000 teachings during his life.  He recognised that different people have widely different requirements depending on such things as temperament, and where they are on their inner journey.  As a result, his teachings were varied as they were many to the point that some could be seen as contradictory, without an understanding of their underlying purpose.

Could it be that Jesus’s teachings were similar?  Does there really need to be such a contradiction between the orthodox church and gnostic practices?  And given that the impact of the gnostic gospels, discovered only relatively recently, has yet to be fully appreciated, could it be that the inner tradition of Christianity, which has been there all along, has yet to fully flower?  Who could doubt the benefit of us all living according to the maxim of loving thy neighbour as thyself, with inner pathways available to those with the inclination to seek them?

I’d like to leave with four lines about the nature of attachment and ignorance – often referred to as two of the three poisons in Buddhism (the third being anger or hatred).  It is our ignorance about the true nature of reality which causes us to crave things, disturbing our peace of mind:

“‘That which oppressed me has been slain;

That which encircled me has vanished;

my craving has faded,

and I am freed from my ignorance.’”

What makes these lines notable is that they were written not by a Buddhist lama, but by Mary Magdelene in The Gospel of Mary Magdalene.  Not only was Mary one of Jesus’s closest followers, and quite possibly the one who had most integrated his teachings, she was also the first one to encounter him after his crucifixion. And she was at the heart of the gnostic tradition.

It was the male disciples who jostled for power in orthodox, patriarchal circles where the Jewish God was most certainly male – even though Jesus had made clear that wisdom could arise in both male and female form.  (Interestingly, there were vigorous debates in the early church as to whether someone who was not Jewish could call themselves Christian.  Tiberius, the Roman emperor of the time, regarded Christianity as a sub-sector of Judaism.)

Imagine how different things may have turned out if the early church had been founded on Mary Magdalene, rather than Saint Peter, and if, in celebration of the divine feminine, the Catholic Church traditionally inaugurated female Popes?!

But I’m having a John Lennon moment and allowing my novelist’s imagination to run away with me.  Perhaps it’s best to Ieave the subject here!

I am deeply indebted to Paul Swanson of Contemplify podcast, who first suggested that I read the books mentioned in this blog post.  For more about Paul’s work, go to: https://contemplify.com/

(Photo credit: grateful thanks to Peter Aschoff on unsplash.com)

I hope you found this article stimulating.  If you enjoyed it, here are a few things you can do: