In Buddhism, sutras are records of the actual teachings of the Buddha.  Like other spiritual teachers, he sometimes offered metaphors to make a point with sufficient power to shift our perspective.  And when it came to explaining the rarity of our lives – yours, and mine – he used a metaphor so mind-boggling that it has become one of the best-known in all the sutras.

Before getting to the metaphor itself, what Buddha was describing was the unlikeliness of a human life with leisure and fortune.  Those terms have specific meanings which deserve brief explanation.

A human life, okay, we can all check that box.  Not that we usually give it a moment’s thought.  When we wake in the mornings, we rarely do so with a celebratory thrill to discover ourselves to be, once again, human.   Perhaps we should.  Because widening our perspective to include all sentient beings who wake up each day engenders a sense of gratitude.  We are not some animal in a stall, truck, or out in nature, whose life may be taken away from it any moment.  Animals share with humans the same basic wishes to enjoy pleasant experiences and avoid unpleasant ones.  To feel safe and, most of all, to stay alive. Modest expectations, perhaps, but how attainable are they for most of the “sem-chens” – Tibetan for “mind-havers” – with whom we share our world?

Buddhist yogis tell us that there are very much worse realms of consciousness than those experienced by animals.  Even more terrifying states exist where anger, violence, craving and poverty play out in ways that are relentless, extreme and inescapable.  What are these hellish states and is there any way to validate their existence for ourselves?

It  is significant to me that some of our most vivid experiences occur not when we’re awake, but when fast asleep, dreaming.  None of our normal senses may be operational yet we can see, hear and experience sensations even more intensely than when we are awake.  From this we can deduce that you don’t need a physical body to endure any kind of experience in a way that seems more real than reality.  Other dimensions of consciousness, including myriad hellish ones, may not so much be material places as states of mind.  Enduring nightmares which our consciousness undergoes, untethered from our body, are no less horrifying because of that.  Perhaps even more so – because what is there to bring the experience to an end?

We endure no such horror at the moment.  Nor are we grazing in a field outside the abattoir. We have the extraordinary good fortune to be human beings in possession of two special attributes.  Leisure, which is available time to focus on matters beyond our most basic requirements for food, shelter and clothing.  Abraham Maslow also suggested that higher level needs, especially ‘self-actualisation,’ becomes more of a focus when our more mundane needs are satisfied, in his famous ‘Hierarchy of Needs.’

Fortune means that we have come across the Buddha’s teachings, the ‘Dharma’.  Apart from being a term generally used for Buddhist doctrine, Dharma refers to something deeper: cessation from suffering.  Buddha’s teachings have endured for millennia and spread throughout the world because they offer tools that really do help us cultivate greater happiness in everyday life, as well as ultimate transcendence to a state beyond suffering.

The Sutra Containing the Excellent

With some understanding about what is meant by a human life with leisure and fortune, what did Buddha have to say about it?  Time for a drum roll … and Buddha’s own words from the Sutra Containing the Excellent.

‘“If there were a huge, deep ocean as big as this entire world with a golden yoke floating on its surface, and, at the bottom, there were a crippled, blind turtle who surfaced only once in a hundred years, how often would that turtle raise its head through the yoke?”  Such an event would be extremely rare, but not as rare as gaining the birth of leisure and fortune.’  (Quoted from Path to Enlightenment in Tibetan Buddhism by Geshe Acharya Thubten Loden, page 211).

Incomprehensible unlikeliness is the feeling we get!  A single yoke floating on an ocean bigger than the Pacific, Atlantic, Indian and all the other oceans combined, and a turtle surfacing every hundred years just happening to put its head through it … what are the chances?!

Each part of this metaphor has specific meanings, and I’d like to explore a couple.  The turtle being at the bottom and surfacing only once in a hundred years symbolises how extremely uncommon it is to experience consciousness as a human, rather than a being in a lower realm.

Pabongka Rinpoche, one of the most influential lamas in Tibet during the first half of the 20th century, whose robust teaching style resonates through his writings, explains in his commentary on the turtle metaphor: ‘Once you have been reborn in the lower realms, it is even more of a struggle to regain a human rebirth than it is to achieve enlightenment in your present rebirth.’

This is something which should give us hope when we feel challenged by our Dharma practice.  By Pabongka Rinpoche’s estimation, we are already more than half way there!

The golden yoke on the ocean surface is the Dharma – the way out of this constant cycling through upper and lower realms.  Some teachers elaborate on how access to the Dharma should never be taken for granted.  It doesn’t exist in most places and is always on the move, driven by currents and winds. 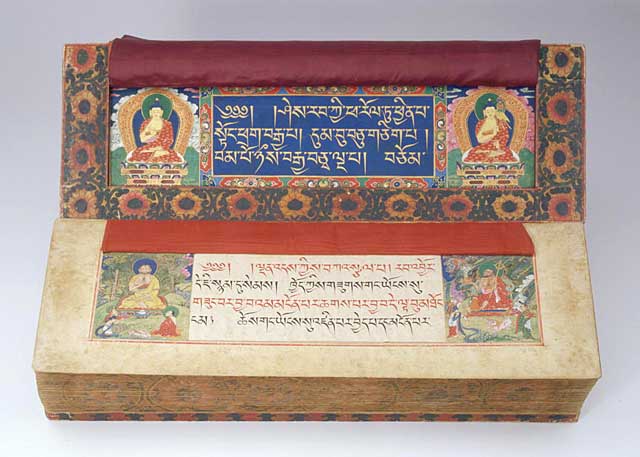 It’s worth contemplating that only 60 years ago – a blink of the eye in human history – almost nothing was known about Tibetan Buddhism outside of Tibet.  There were no books, internet or teachers.   We enjoy these things right now, but how long for? Buddha himself taught in what we now call Nepal and India, but Buddhism is no longer widely practiced in those countries.  90% of the monasteries and monastics of Tibet no longer exist.

Even in our world, the golden yoke is constantly on the move.  And from a more panoramic perspective, which sees ours as only one of infinite worlds in the universe, as Pabongka Rinpoche says, ‘we cannot be sure that a Buddha’s teachings will remain in a particular world, and in any case such teachings would only remain there a very short while.’

So here were are, you and me, in ever-shifting circumstances, rarer than a blind and crippled turtle who surfaced to the top of an enormous ocean and just happened to stick his head through the golden yoke.  Winning the lottery seems an almost commonplace stroke of good fortune by comparison.

If Buddha was right about this, as he was about other things, it does prompt a particular question:  what are we doing to make the most of our extraordinarily rare opportunity?

I hope you enjoyed this update.  If you did, here are a few things you can do:

Join me on Mindful Safari at Victoria Falls.  On Mindful Safari we combine game drives and magical encounters with lion, elephant, giraffe, and other iconic wildlife, with inner journeys exploring the nature of our own mind. Find out more by clicking here.